The Lounge Sound- Phoenix 1480AM

While the "Standards"are vanishing from many traditional radio stations one up-start internet station is trying to reverse the trend. MartiniInTheMorning.com will be programming KPHX 1480 AM in Phoenix and bringing the timeless music we know as "The Great American Songbook" back to traditional radio. 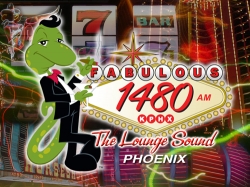 Phoenix, AZ, January 02, 2009 --(PR.com)-- While the "Standards"are vanishing from many traditional radio stations one up-start internet station is trying to reverse the trend. As Frank Sinatra belted out 'I did it my way' so to has The Standard Media Group's internet radio station MartiniInTheMorning.com. The North Hollywood, CA based MartiniInTheMorning.com is a totally listener supported internet radio station and is one of the most listened to stations of its kind. Starting January 1, 2009 they will be programming KPHX 1480 AM in Phoenix and bringing the timeless music we know as "The Great American Songbook" back to traditional radio in the Phoenix area.

Music has always been and will continue to be the cornerstone of this generation's lifestyle. "We Boomers still love our Rolling Stones and Beatles CDs. But we've heard all those songs over and over." Chambers points out that Boomers in radio created the short playlist, fast turnover Top 40 radio format. "We love those songs but they're not making many new rock 'n roll oldies. So we go looking for something new - especially in social situations," he adds. "We have friends over, we're making martinis and 'Brown Sugar' by the Rolling Stones doesn't cut it. But Sinatra's 'One for My Baby,' does! We have graduated from rock concerts on the green to an intimate jazz show with seats near the stage. We can still knock 'em back, but with a martini glass, of course."

The new KPHX 1480 AM radio station will be a combination of classic "Standards" like the aforementioned Sinatra saloon song - and contemporary recordings like a version of the same song on a recent CD from harmonica legend Toots Thielmans, featuring 28 year old British Jazz wunderkind Jamie Cullum. Chambers adds, "It's amazing the list of artists who identify "Standards" as their inspiration...from Elton John (whose cover of George and Ira Gershwin's 'But Not for Me' is heard opening the 1994 big screen hit Four Weddings and a Funeral) to Rod Stewart. Stewart's Great American Songbook series is closing in on 20-million units in sales and gave the 63 year old rocker his first Grammy ever."