March 10th is National Women and Girls HIV/AIDS Awareness Day, a day to raise awareness of the increasing impact of HIV/AIDS on women and girls and encourages them to take action. Governor of Washington, Christine O. Greagoire, signed a proclamation on February 17, 2009 to proclaim March 10 as a day for citizens to join her in this special observance. A special event is scheduled on March 10th at the Theatre on the Square, 901 Broadway, Tacoma,WA. 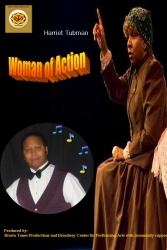 On February 17, 2009 Governor Christine O. Gregoire issues a proclamation of March 10, 2009 as Women and Girls HIV/AIDS Awareness Day. She urge all the citizens to join her in this special observation.

There was also a proclamation for March 10 as Women and Girls HIV/AIDS Awareness Day and Harriet Tubman Day, in Pierce County, by Pat McCarty, Pierce County Executive.

Most people know Harriet Tubman as the most renowned conductor on the Underground Railroad. She was a woman who not only emancipated herself and up to 300 other people from slavery, she also was a leader, scout, nurse in the Civil War, an advocate for human rights, civil rights, women’s right to vote, and was one of the founders of the National Association of Colored Women. Harriet Tubman lived to be 93, and up into her 80s, she continued to care for others and established a convalescent home in Auburn, New York. She died on March 10, 1913. Harriet Tubman would be an advocate for the prevention of HIV/AIDS and her story empowers women to Take Action in their Life to Prevent AIDS.

During Women’s History Month 2009, on March 10, Brown Tones Productions unites these two observations to present an opening for the conversation on HIV/AIDS. By talking about this event, we can remove the stigma of talking about AIDS. The ultimate goal is to increase the number of women and teens taking actions in their health to protect themselves from HIV /AIDS.

Brown Tones Productions presents a Historical Portrayal of Harriet Tubman called “A Visit with Aunt Harriet Tubman" performed by Karol Brown and James Brown is an unforgettable learning experience for school age children to adults. Karol is a health educator, that has found that storytelling is an affective way to advocate for health issues.

Karol Brown as a 92-year-old Aunt Harriet brings you as close to meeting Harriet Tubman as you will ever be with her engaging, spellbinding, portrayal that touches everyone in the room.