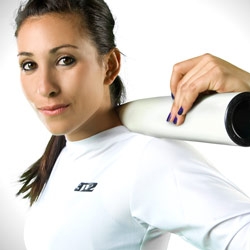 As an official spokesperson, Galindo will endorse 3N2’s full fastpitch product line; from softball cleats and trainers to performance and workout apparel. She will feature prominently in 3N2 marketing materials, serve as a key member of 3N2’s Women’s Advisory Council and take part in the Team3N2 clinic series in the fall of 2009.

Galindo, an infielder, spent the 2008 season on the U.S. Women’s National Softball Team that won the Silver Medal in the Summer Olympics in Beijing. Galindo hit .600 in six games played in the Olympics. In 2009, she returns to the NPF where she will help the Chicago Bandits defend their 2008 NPF championship. Galindo has played for the Bandits since 2005. She has also been invited to try out for the U.S. National team once again in 2009.

Galindo attended the University of California, Berkeley where she was a two-time First team All-American. She was named to the WCWS All-Tournament Team in 2003 and 2004, and was a three-time All-Region selection. Galindo ranks second in the Cal career record books in both runs scored (141) and stolen bases (61).

Galindo cited 3N2’s steadfast commitment to women’s fastpitch as a key component of her decision to sign with the company. “The amount of time and energy that 3N2 has put into women's fastpitch continues to amaze me,” Galindo said. “They are 100% dedicated to the progression of the sport and are determined to make women's fastpitch a staple in the United States.”

“We couldn’t be happier to have an athlete of Vicky’s caliber join 3N2,” said company President Marty Graham. “She is a fierce competitor and tremendous human being. She truly represents the essence of our brand.”

The Galindo signing comes on the heels of another high-profile addition to the 3N2 team; fellow NPF standout and former NCAA player of the year Angela Tincher. Galindo noted that the professionalism of 3N2 as an organization and comfort of the product are attracting some of the biggest names of NPF to 3N2.

“3N2 is a product and company on the rise. Their professionalism and involvement in the game is being noticed,” Galindo said. “Not to mention their cleats are extremely comfortable and lightweight. Women's fastpitch has been in desperate need of a company like 3N2. They care about the game.”

About 3N2
Headquartered in Orlando, FL, 3N2 maintains a singular focus on designing and developing the most durable and dynamic line of comfort-driven, performance-boosting baseball and softball cleats in the marketplace — footwear that elevates the games of players whether they’re eight or eighty, Jack or Jill, a big leaguer or a t-baller.