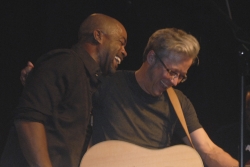 Nashville, TN, July 30, 2009 --(PR.com)-- Radney Foster celebrated his 50th birthday by putting on a 2 plus hour show with his band the Confessions and an impressive list of special guests including Dierks Bentley, Darius Rucker, Vince Gill, Lee Roy Parnell, Jon Randall, Jessi Alexander, Georgia Middleman, Bill Lloyd, Radney’s son Julien Foster, a 16 piece gospel choir, and more. Radney also surprised concert-goers by giving away free Interactive Flash Drive wristbands to lucky fans as they entered the Exit / In. Gigmark Interactive Media (www.gigmark.com) sponsored the giveaway and is the company behind the revolutionary Interactive Flash Drive (IFD) technology. The white “wristband style” flash drives had Radney’s new album title “Revival” (set for a September 1 release) printed on them in bold red letters. The IFD’s came loaded with Gigmark’s patent-pending software which gave attendees the ability to listen to the HD recording of the show, watch exclusive video shot from the party, see a pre-recorded “thank you” from Radney, enjoy photos from backstage, and even to view a preview of his upcoming documentary “Behind the Confessions” all through a striking Radney Foster interface. Radney is planning a similar Interactive Flash Drive to coincide with his new album, new documentary, and upcoming tour that will resemble a "VIP Pass." The VIP Pass IFD is already available for sale on his website radneyfoster.com. Purchasers will receive the limited edition “VIP Pass” and lanyard containing an Interactive Flash Drive loaded with the Gigmark software that will deliver 18 songs including all of the new CD - Revival, the bonus EP tracks, plus the full length "Behind The Confessions" documentary. The VIP Pass will also give the wearer access to pre-show meet and greets with Radney on the upcoming Revival tour and will enable Radney to share bonus content exclusively with the VIP Pass holders throughout the tour.