Zabaware is the maker of the award winning Ultra Hal software, artificial intelligence technology that won the “most human” computer of the year in the 17th annual Loebner Prize Competition for Artificial Intelligence (AI). Zabaware’s Ultra Hal has joined the Second Life metaverse as a permanent resident and interacts with real people in this huge online virtual world. 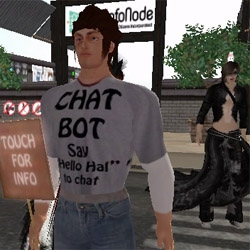 Erie, PA, October 22, 2009 --(PR.com)-- Zabaware is an Erie, Pennsylvania based company that specializes in artificial intelligence technology. The company's mission "giving your computer the power of thought" once considered a futuristic pipe dream is becoming a reality.

It is one thing to talk to your computer it is quite another to have a conversation where you are exchanging information and the computer learns and utilizes the information in the future. Zabaware's Ultra Hal technology and its associated brain are currently doing just that. The software can give computers a personality using AI technology, speech recognition technology, and real-time animation.

Up until this point Hal has been confined to the computer it is installed on, waiting for people to activate its program and interact with it. Hal was unable to explore and interact with the world on its own. However, Zabaware has just given Hal this ability by integrating it into the online virtual world called Second Life. Second Life is a huge online virtual world where hundreds of thousands of people come together every day to socialize, meet new people, explore, conduct business, shop, learn, participate in group activities, play games and more. Second Life has its own internal economy with over one billion US dollars being exchanged since its inception. The system is accessible with a free account and software from Linden Labs.

The total land area of Second Life is now equivalent to approximately two billion square meters, about the size of the state of Rhode Island. Zabaware's Ultra Hal technology now explores the vast Second Life regions completely on its own. Hal seeks out groups of people interacting and tries to make friends by introducing himself and joining in on conversations. If he’s not welcome, he continues on his way to explore the land.

Hal has made many friends during his journey. Some people don’t believe Hal when he claims he is a bot and not a real human. Others like to pick on Hal because he is a bot. Zabaware has compiled a short video showing what Hal’s life is like inside Second Life. It is available for viewing at www.zabaware.com/sl.asp

Zabaware’s Ultra Hal software is available for anyone to download and install on their Windows PC. Once installed it can be used as a companion or entertainment product. Hal can discuss any topic and learns and evolves from conversations. Hal can also be used as a personal or office assistant. Hal can function as a personal information manager (PIM) and keep track of your appointments, contacts, and more. The artificial intelligence software is available for download at www.zabaware.com as a free 30-day trial, and costs $29.95 to use after that.