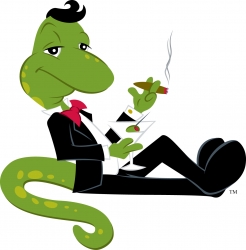 Chicago, IL, January 07, 2010 --(PR.com)-- Effective immediately, longtime broadcast veteran Chuck Hillier has joined the Standard Media Group as its VP / General Manager of their 24/7 internet radio station "Martini in the Morning." www.MartiniIntheMorning.com This is an inevitable union of the two most prolific ambassadors for the only hot, hip alternative to the traditional, dying & decaying "Standards" format: Hillier finally unites with his longtime friend and format-competitive companion...Brad "Martini" Chambers. Chambers is the founder and Chief Creative Officer at The Standard Media Group, a North Hollywood, CA based company operating MartiniInTheMorning.com, one of the most listened to Internet Radio Stations of its kind.

"Martini" is unique not only for its ownership of "The Lounge Sound" but in the fact that it has a live morning show, hosted each weekday by Brad, himself. Additional dayparts will soon be filled out as well. The format is available for terrestrial syndication effective immediately.

Hillier claims that the timing of this union is simply perfect: "There is an ever growing hunger for a high quality program solution to the undeniable and certain sameness found on both sides of the dial."

Hillier says: "If Content is King...well, then, we've cracked the code."

He asks: "What is it that The Pottery Barn, Restoration Hardware, Victoria's Secret and Starbucks know about this great music and the positive ambiance that this sound provides, that somehow, over-the air-radio has yet to reclaim? Seriously, what do you hear in the great steakhouses, your favorite club or lounge? Behind terrific movies or the best TV commercials?"

"The Lounge Sound" is not about nostalgia. It IS about re-energizing The Great American Songbook, “It’s a lifestyle thing,” says Brad “Martini” Chambers. "Where what happens between the songs is as important as the songs themselves." "The Lounge Sound" attracts consumers that are disenchanted with mainstream radio and those that are targeted to kids. It’s a community, but not one defined by a city or county line; rather, one expanded by today’s global technology. They are creating a new way to reach a community of people, people who love the music.

It's amazing, says Hillier. The Standard Media Group's new library mirrors those personal, cool collections of radio's greatest business-people...as well as the best and brightest of the ad community. It is a validated "Media Darling."