Announces the publication of the novel 'Hoodie' by Brendon Lancaster. The novel provides an antidote to alarmist right wing reporting of youth issues by exploring the problems facing modern day Britiain from the perspective of a disempowered, disaffected teenager. 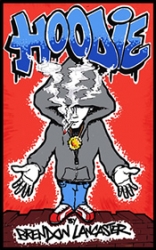 London, United Kingdom, January 21, 2010 --(PR.com)-- Not since the leather jackets associated with lawless biker gangs in the 60s has any single item of clothing managed to symbolise trouble and provoke a knee-jerk reaction of fear and condemnation amongst otherwise rational citizens as the innocent hoodie. Such has been society’s collective disapproval of them, that those wearing them can find themselves stripped of their individualism and labeled ‘Hoodies’, finding themselves banned from stores and shopping centres with the blessing of the media and authority. They’ve even driven politicians to debate them and infamously prompted David Cameron’s ‘Hug a Hoodie’ speech.

But although the hoodie’s shroud of anonymity can present a sinister image, what really goes on underneath those hoods?

‘Hoodie’, published by Authorhouse, tells the story of Ben, a contemporary anti-hero, struggling to retain his integrity in a world of shifting values, trying to find direction where few choices exist. The novel provides an antidote to alarmist right wing reporting of youth issues, exploring the problems facing modern day Britain from the perspective of a disempowered, disaffected teenager.

Its blend of up-to-date realism, dream-like escapism, fast-paced, hard-hitting action, wistful musings, humour and tragedy, all while the story navigates its way on a magical mystery tour of Ben’s mind, ensures an enjoyable read. On a deeper level, there is a moral/spiritual sub-text, fed by Ben’s belief that he is someone special – with special abilities.

Ben has a secret weapon; the simian lines on the palms of his hands. These describe the fusion of the head and heart lines, where only a single line cuts across the palm. They are extremely rare and noted as being a genetic abnormality shared by drug addicts, mass murderers, scientific researchers and religious fanatics. After a meeting with a former schoolmate’s mother, Ben becomes aware of the auras of those around him, boosting his confidence in his own supernatural powers. Could these lines hold the key to Ben’s future?

Brendon Lancaster, the novel’s author, says: ‘”Hoodie” gives readers the chance to view the world through the eyes of a very unique individual as Ben attempts to carve a path out for himself. His entertaining and emotional escapades cause him to question today’s competitive, consumer-based values, eventually challenging his own beliefs and perception of reality and providing him with a definitive test of resolve and bravery.

Today’s society can, at times, be very harsh and judgemental. I hope that ‘Hoodie’ will encourage readers to question their perception of others, whatever their appearance, in a more open minded way.’

‘Hoodie’ is Brendon Lancaster’s first novel. Like the character in the book, Brendon grew up in the Paddington/Notting Hill area of London and also has simian lines on both of his palms. He has, however, shown no sign of possessing any of the traits associated with them. Yet.

Hoodie is available for order worldwide in paperback and eBook format from Authorhouse, other online retailers - including Amazon - and by order via local bookstores.