mtiks is a privately held firm based in Andover, MA, USA. mtiks is the leader in providing anti-piracy service for iPhone/iPad developers. It's currently offering services for its private beta customers. 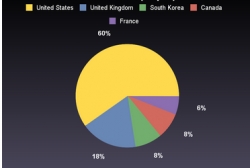 Andover, MA, July 19, 2010 --(PR.com)-- mtiks is the leader in providing anti-piracy service for iPhone/iPad developers. mtiks is focusing on providing powerful statistics along with reports and charts that are meaningful for developers. mtiks complies with all Apple standards & privacy policies and does not affect legitimate app customers. Over a period of research and development mtiks have identified several techniques to identify a pirated app and convert those pirate users to be your customers.

mtiks is currently working with several clients to implement the framework and provide the opportunity to let their pirated app users purchase the app. The major categories where mtiks is successful but not limited to are gaming, business, lifestyle, productivity and media. Flurry earlier stated that the piracy rate is less in US and high in China – and that might be based on the overall data they have. mtiks found this to be different and that the app piracy depends on an individual app. mtiks measured the piracy rate for a news reader app as following - 60% app piracy in USA, 18% in UK, 8% in South Korea, 8% in Canada, 6% in France and all other constitute the rest (Source: mtiks blog).

And an another sample of a utility app proves that 62% of app piracy is in US, 18% in Singapore, 11% in UK, 6% in Malaysia and 3% in Australia. Most of this traffic comes from apptrackr, a piracy source for iPhone/iPad apps.

iPhone/iPad app developers have seen that the Apple revenue and analytics statistics they have implemented never match because of piracy factor, few developers went ahead and added their own anti-piracy measures which stops pirated app users from using the app. mtiks takes a different approach of recovering money from pirated apps since those app owners are potential customers too. It is an ongoing challenge that the mtiks team face with unknown pirates but mtiks is successful so far and pledge to continue the efforts.