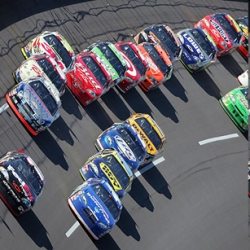 Mooresville, NC, August 10, 2010 --(PR.com)-- Fast drivers, cool cars, beautiful women and loads of prominent sponsors are integral to the appeal of NASCAR. That’s why, to maintain authenticity, V1 Entertainment Films is auditioning advertiser/sponsors to star in its new NASCAR-themed television series, “The Ride.” Acclaimed film and television actor/director Giancarlo Esposito of AMC’s “Breaking Bad” has agreed to direct the project, which is being targeted as a Spring 2011 network replacement series. Veteran WGA screenwriter Tony Sommo has been tapped to write the script.

“The Ride” is a character-driven story about the exploits of a tight-knit group of drivers from different worlds set in the Lake Norman area of North Carolina, north of Charlotte, often called Race City USA. “There’s no other sport like NASCAR, where the advertisers become so entrenched in the action and have such dynamic behind-the-scenes roles,” noted Aspen Hughes, CEO of V1 Entertainment Films. “The advertising sponsors are important characters in the storyline of ‘The Ride,’ so we’ve got to get it right.”

Hughes is reaching out to brand managers and marketing executives of food, automotive and packaged goods companies, as well as their advertising agencies, in the unorthodox casting call. Product sponsors who join “The Ride” will be working directly with all key decision-makers on every aspect of production, right from the start. Hughes has hand-picked a well-connected team of racing consultants to be on board from script development to final edits to soundtrack to promotion. V1 Entertainment Films’ personal and professional relationships with NASCAR, drivers, teams, tracks and off-track locations assure the kind of authenticity that both sponsors and viewers demand.

While Hughes would not reveal just yet which companies have already signed on for “The Ride,” saying he did not want to spoil a planned gala announcement, he did allow that, “Tony Sommo has written some very intriguing scenes, not only for an automobile manufacturer but for a tool company, a fast-food chain, a mobile phone provider, a record label, even a jewelry company. The product sponsorship opportunities are diverse and will give the right partners a terrific return on their investment.”

Hughes continued, “’The Ride’ is a win-win for advertisers,” citing a study done by the major television networks in 2005 which revealed that 90 percent of viewers surveyed said they skipped all or most of the commercials.1 “Faced with a diminished passive audience, advertisers have had to revise their marketing strategies and find other ways of promoting their products.”

The product placement market is growing rapidly, with the value of the industry in 2010 estimated to be more than $5.5 billion in television alone.2 “Add exposure in new mediums, such as the online virtual world Second Life, and the tagging and linking of products on consumer-generated media sites like YouTube, and opportunities offered by ‘The Ride’ are not only economical but extremely effective, especially in reaching that elusive young-male demographic,” said Hughes.

He added that getting Esposito to direct the pilot was “a major coup,” and if it is picked up, Esposito will likely continue to take the director’s reins. The popular star had been seeking more opportunities to direct since producing and directing the 2009 independent film, “Gospel Hill,” which, despite its small budget, afforded Esposito a chance to direct such Hollywood talents as Angela Bassett, Danny Glover, Adam Baldwin and an uncredited Samuel L. Jackson.

Advertisers interested in more information or in auditioning for a part in “The Ride” are invited to visit www.V1EntertainmentFilms.com.

About V1 Entertainment Films
V1 Entertainment Films is a worldwide film fund actively engaged in bringing unique, compelling stories to movie theatres and television. The company is committed to discovering properties propelled by compelling characters and original situations that demand to be projected and offer the potential for profit. In an industry that has earned a reputation for sometimes questionable business practices, V1 Entertainment Films offers unprecedented transparency. Because they offer personal service at all levels of the organization, they safeguard that all projects are conducted with complete clarity and integrity. For more information, visit www.V1EntertainmentFilms.com