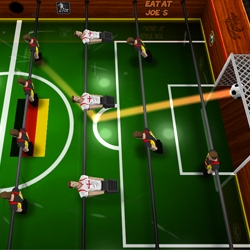 Stinger Games' new arcade sports title convincingly closes any remaining gap between the 3D graphics of gaming consoles vs. iOS devices. Featuring an ultra-realistic, 3D foosball table simulation, the action replicates the foosball experience exactly. Players can adjust the level of control they have over their men, and gameplay changes speed with passes, steals, and shots. The game's remarkable flying cameras automatically dive from overhead to ground level to competitor's views of the action, following the ball as it leaves behind a visible, yellow trail of light. Combining realistic game physics and AI, Stinger Foosball League can be set up for a quick mini-game, multiplayer match, or a championship tournament.

Two factors determine the success of a sports simulation game: the realistic reproduction of visual detail and the quality of gameplay. By this standard, Stinger Foosball League is among the best iOS sports games available. The graphic detail is all there in the foosball players, the table, the ball, and the atmosphere. And the cameras move swiftly and smoothly, giving the player a dynamic view of all the textures, reflections, lighting, and colors carefully crafted into the game. The visual experience is heightened even further by the camera work, optimized for gameplay. There is a wide variety of long shots, medium shots, close-ups, and ultra-close-ups. Through a variety of camera moves the gamer sees the action from every angle, perfectly captured by each camera via expert panning, tilting, and craning, as the screen cuts from camera to camera.

The quality of gameplay is equally impressive. Controls are responsive and adjustable, and the tactile/visual feedback is finely tuned. Stinger Foosball League allows the gamer to choose from four different control methods. Auto Kick is for casual and novice gamers who can drag players side-to-side with one finger. The players will automatically kick the ball on their own, and users can flick their finger forward to perform a spin kick. One Touch is for intermediate players who want control of kicking. Again, gamers drag players side-to-side with one finger and flick to perform a spin kick. Dual Touch is for advanced players wanting full control. They touch their finger to the closest player/rod they want to control and drag that finger to move players and kick. They can control two separate player/rods at the same time with separate finger touches, and flick a finger to perform a spin kick. Tilt is for hands-free gameplay, tilting the device from side-to-side to move players with auto-kick.

With four different methods of control, the game also offers four different difficulty levels: Easy, Medium, Hard, and Extreme. There are also four Mini-Games, practicing one aspect of the game. In Penalty Goalie, the player tries to stop the opposition from scoring. In Penalty Shot, the aim is to beat the goalie on a free kick. In Hardest Shot, players can work on the speed of their shots. And in Striker, players must score as many goals as possible in 60 seconds. There is a Split Screen mode to play against a friend available only on iPad. The game also supports competition between two players via WiFi and Bluetooth.

Gamers can play foosball with 52 international teams from around the world. Players can bring pride to their flag, or create a new team featuring customized jerseys displaying any flag or logo in their iOS Photo Library. Create a team and compete worldwide:

"We love taking an idea and really turning it into something extremely special," stated CEO Blaine Hodge. "The extra passion we put into our games really shows and makes for something you love to play again and again."

Fully Configurable:
- Choose from four different control methods
- Auto Kick for novice and casual players wanting easy gameplay
- One Touch for intermediate players to kick for themselves
- Dual Touch for advanced players wanting full control
- Tilt for hands-free gameplay
- 4 difficulty levels: Easy, Medium, Hard, and Extreme
- Customizable camera to see the game from any point of view
- In tight to see all the action up close
- Bird's eye to see the whole game at once
- Tilt detecting to automatically move the view up and down
- Manual or automatic goalie control

Tournament:
- Play against rival nations and teams
- Choose between 4 or 8 team tournaments
- Select length of pre-tournament season (from 0 to 28 games before entering the tournament ladder)
- Best of 3, 5, 7 or single game elimination

Four Mini-Games:
- Penalty Goalie to stop the opposition from scoring
- Penalty Shot to beat the goalie on a free kick
- Hardest Shot to work on your shot speed
- Striker, score as many goals as possible in 60 seconds
- Compete against others' Game Center and OpenFeint high scores
- Improve foosball skills

Statistics:
- OpenFeint and Game Center compatible
- Leaderboards to compete against friends and people around the world
- Achievements to reward Foosball skills

Pricing and Availability:
Stinger Foosball League 1.0 is $1.99 USD (or equivalent amount in other currencies) and available worldwide exclusively through the App Store in the Games category. Journalists and reviewers who wish to check out the game are welcome to contact Stinger Games.