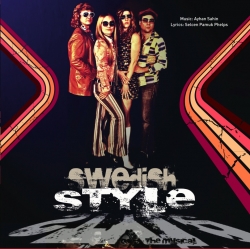 New York, NY, October 16, 2012 --(PR.com)-- No mention of timeless pop music would be complete without Swedish pop super group ABBA at the top of the list. For a decade starting in 1972, the quartet released eight studio albums and a staggering 73 hit singles. In all, Benny, Björn, Frida and Agnetha have sold more than 370 million albums around the world.

But all good things come to an end, and ABBA’s demise was sullied with divorce between the two couples, internal strife and ultimately, dissolution.

This is the story that inspired full-length rock musical “Swedish Style,” written by Turkish composer/producer and NYU Tisch School of the Arts Master’s grad Ayhan Sahin. Selcen Pamuk, equally accomplished as a university professor with a PhD and Master’s in Business, wrote lyrics.

The dramatized theatrical production—set in the early 1980s and rapt with love, loss, friendship, heartbreak and the penance of ultimate artistic immortality—illustrates the saga of beloved pop group Opus 10’s demise, following the break-up of the quartet’s two couples. Manager Anna pleads with members Reno, Rita, Kurt and Katherine to deliver a final album that propels them beyond their “bubble gum” legacy and insures legendary status in the pop pantheon. Ultimately, the group’s primary nemesis turns out to be staring them in the mirror, as they strive to conjure their original magic one more time and achieve “immortality.”

“Swedish Style” was originally staged in the mid-1990s at the Operetta House in Sahin’s native Ankara, Turkey, with subsequent performances in Copenhagen; Reykjavik, Iceland; and a symphonic version staged in Istanbul by the acclaimed Presidential Symphony Orchestra. In addition, “Swedish Style” was honored via an alliance of the Swedish-Turkish Cultural Cooperation during Stockholm 98’s Cultural City of Europe campaign. The ensemble featured a cast of 45 performers/musicians and 25 offstage contributors.

The success of “Swedish Style” also led to a personal invitation by the Swedish Ambassador in Turkey, then, Michael Sahlin for Sahin to fly to Sweden for a rendezvous with ABBA founders Benny Andersson and Björn Ulvaeus “to strengthen musical and cultural cooperation between Sweden and Turkey.” Within the past decade, the musical has also been showcased on VH1 in the U.S. and in a one-hour special on Turkish National Radio.

Now based in New York, Sahin has revised and refashioned “Swedish Style: The Musical” for licensing by commercial theatrical groups and schools. The concept album for the musical comprises a full-cast vocal production featuring five principal singers and an eight-member ensemble mastered for use in licensed productions of the show. The 12-piece band offers a robust palette of keyboards and piano; electric, classical, flamenco and acoustic guitars; percussion, bass, violin, cello, flute and sax.

A video vignette was also filmed by Christopher Holmes/Holmeswood Features Entertainment in December 2011 that provides a compelling sketch of the new production and its soundtrack recording. The five-minute promotional trailer offers potential production companies a snapshot of the cast in action, detailing elements of the script, choreography, set and costumes.

Of course, the inspiration for “Swedish Style: The Musical” remains as vital today as it was 30 years ago. ABBA has indeed become immortal, thanks to the ongoing success of Broadway sensation “Mamma Mia!” and the accompanying 2008 film starring Meryl Streep, along with the group’s 2010 Rock and Roll Hall of Fame induction.

Now, adding to the legacy, “Swedish Style: The Musical” offers, for the first time, the captivating tale of a lesser-known—but all-important—chapter in the group’s fabled history. “It is through death a legend is born,” is a pivotal line in the production. Through this theatrical dramatization, the legend lives on.