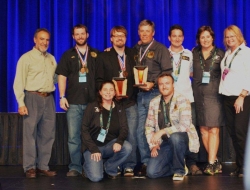 Rosleand, VA, October 17, 2012 --(PR.com)-- Devils Backbone Brewing Company was recognized as the Small Brewpub and Small Brewpub Brewer of the Year in addition to taking home an amazing eight medals at the 2012 Great American Beer Festival (GABF). Devils Backbone, located in Virginia’s Heartland, has won more medals and awards at The Great American Beer Festival and World Beer Cup than any other single brewery in the Mid-Atlantic region and more than the other 45 breweries in Virginia combined in its four-year history.

“It is hard to explain how monumental these awards are in the brewing industry and they highlight the amazing good fortune and talent of our brewers and staff at DBBC. Our history, in a few short years of operation, has been remarkable as a result of winning dozens of medals, 2010 World Beer Cup for Small brew Pub, The 2012 Virginia Cup for Best of Show and now the 2012 Great American Beer Festival for a Small Brew Pub. This puts Devils Backbone Brewing Company in the unique position of being recognized as one of the country’s most outstanding craft breweries. Additionally we are heartened by our new Outpost Brewery’s recognition of making world class craft beer. None of this of course would be possible without the support of our partners and more importantly the community of craft beer enthusiasts who reach for a Devils Backbone beer whenever they are looking to slow down and enjoy the moment,” said Steve Crandall, owner of Devils Backbone.

Since opening Basecamp Brewpub in 2008 at the base of Wintergreen Mountain in Nelson County, and then their production facility in 2011, it has been the consistent quality of beers that has propelled Devils Backbone into a leadership role for craft beer in Virginia. Their prestigious collection of nationally recognized medals includes seventeen Great American Beer Festival medals and five World Beer Cup awards. Devils Backbone has also been recognized for Small Brewpub and Brewer of the year two times at 2010 World Beer Cup and at the 2012 Great American Beer Festival respectively.

About Devils Backbone Brewing Company
The Basecamp Brewpub is a 300-seat restaurant with a 1200 square foot brewery featuring a 10-hectoliter brew system acquired from a restaurant in Tokyo. The brewery produces 1000 barrels annually. The Outpost Brewery completed in November 2011 is a 15,000 square foot production facility with a 30 barrel Rolec system, which houses a 125-bottles-per-minute SBS line and a Tap Room (beer only). The Outpost Brewery will complete the year with 10,000 barrels.