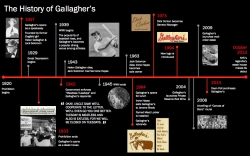 “Gallagher’s is a New York City institution. When we re-open, diners will witness a true All-American restaurant revival in the heart of the Theater District,” said Dean Poll, restaurateur and new owner of Gallagher’s. “For more than 85 years, New Yorkers and tourists alike have come to this legendary steakhouse. Gallagher’s is much more than a restaurant, it’s part of the fabric of New York City and we plan to make it relevant again.”

Poll, who spent the last six months getting to know the clientele at Gallagher’s, has hired famed restaurant designer, Peter Niemitz of Niemitz Design Group to restore the restaurant. The iconic meat locker, which showcases the quality and unique dry-aging process of the USDA Prime steaks, will remain at the front of the restaurant. The famous Gallagher’s dry-aged beef will still be grilled over hickory coals, as the restaurant has always done, plus the menu will see additions and updates to its classic steakhouse fare.

Making its New York City premiere this fall, the new Gallagher’s will once again be completely updated inside and out, while still remaining true to its heritage as an old New York steakhouse.
Contact
Gallagher's
Kimberly Yorio
212-609-5009
www.gallaghersnysteakhouse.com/