Celestine Publishing announced the release of “Gods Many and the Lineage of Saviors: the Most Plausible Theory of the Creation That Is.” Author Chase Landing introduces several new and controversial theories that address the plurality of the Godhead, the mysterious lineage of Jesus Christ, and a fresh look at the story of the creation and how it all began. Celestine Publishing calls it “new thinking on the topic of the creation and the most plausible theory of the century.” 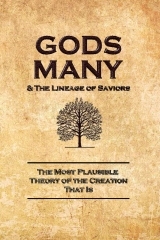 Raleigh, NC, August 04, 2013 --(PR.com)-- Celestine Publishing (www.celestinepublishing.com), released an independent publication, “Gods Many and the Lineage of Saviors,” by Author Chase Landing. “Gods Many” introduces a novel and fresh look at the creation of the world and how it all began. Not without controversy, Landing also uncovers new perspectives on the plurality of God and an interesting hypothesis on the lineage of Jesus Christ as he takes a reasoning approach toward several mysterious verses found in the New Testament and other authoritative text.

“The theory of evolution and big bang theory are scientific approaches that men try to explain the unexplainable in the absence of God. It just didn’t happen that way,” says author, Chase Landing. “Instead of relying on science to prove something that can’t be proven, we have significant clues in the scriptures that shed greater light on the subject we've overlooked or misinterpreted over the centuries.” He continued, “Here I explain those verses with new reasoning one step at a time; which in turn yields different concepts that may change what you think life is all about.”

Revisiting the infamous King Follett Discourse given by the Latter-day Saint prophet, Joseph Smith; Landing simply illustrates how intelligences evolved, what differentiates each kind and species placed on the earth, and he explains new views on the preeminence of Jesus Christ and the meaning of his eternal sacrifice for mankind. His questions are probing and thought provoking; Landing’s conclusions are not meant for the faint of heart, but are instead meant for those who enjoy exploring the possibilities.

Landing concluded, “Gods Many introduces new thoughts on why all men should reverence the name of Jesus Christ in recognition of the monumental task only he could perform for our continued growth and salvation. It was written solely to get people to think more deeply about Christ’s supernal role in the plan of happiness, how all life came to be, what we’re here to become one day at a time.”

“Gods Many and the Lineage of Saviors” is available for purchase through www.celestinepublishing.com, www.createspace.com or www.amazon.com.

Celestine Publishing, established 2002, is based out of Raleigh, NC and is the publisher of the “Principles with Promise” series; topical guides that catalog thousands of scriptural doctrines and principles for Latter-day Saints, Catholics and the rest of the Christian world. Celestine’s website also contains links to other nonfiction and fiction titles, the Principles with Promise series, and several blog articles on a variety of scriptural, principle-centered and real world topics by experiential apologetic, author and publisher, Vinny DiGirolamo.

Celestine Publishing is not affiliated with The Church of Jesus Christ of Latter-day Saints, nor does it necessarily reflect their teachings or beliefs. "Gods Many and the Lineage of Saviors" is the independent work of Author, Chase Landing who takes full responsibility for its contents and concepts.
Contact
Celestine Publishing
Vincent DiGirolamo
919-830-8468
www.celestinepublishing.com
9660 Falls of Neuse Road
Suite 138, #146
Raleigh, North Carolina 27615

Gods Many and the Lineage of Saviors is new thinking on the topic of the creation, how it all began and the role of Jesus Christ from before time began.