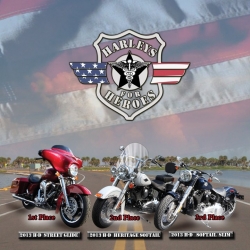 Upon notifying the first place winner over the phone, Frank could not believe his luck. "I am flabbergasted!" he exclaimed. The second place winner, June had to take a seat. "Are you serious? It's a good thing I'm sitting down right now," she gushed. Michael, winner of the third place prize, had some emotional words to share. "My dad was in the Navy and the military tradition is very strong in my family. You've just gotta support the people that go," he explained.

About Healing Heroes Network
After the terrorist attacks on September 11, 2001, and the subsequent war on terror, thousands of members of our armed forces have been injured in Iraq and Afghanistan. Often these men and women are unable to receive the treatments that would facilitate their return to a productive civilian life. While the Department of Veteran Affairs provides treatment to these troops, the scope of covered services is limited, sometimes unavailable, and often delayed.