El Paso, TX, January 24, 2014 --(PR.com)-- Fans at two popular college bowl games were treated to a special thrill when Dana Bowman, a member of Team Fastrax, America’s Skydiving Team, parachuted into each stadium prior to their respective kickoffs.

Bowman, a retired Special Forces Soldier and former member of the U.S. Army’s elite parachute team, the Golden Knights, has gained global renown as a double amputee who continues to perform at high-profile events. His story – a classic tale of tragedy transformed into triumph – has inspired millions for nearly two decades.

At both events, Bowman descended from the sky on a special parachute bearing the logo of the Coalition to Salute America’s Heroes (Coalition), a leading not-for-profit organization dedicated to rebuilding the lives of severely wounded veterans of the combat operations in Afghanistan and Iraq.

The military hero was a featured speaker at the Coalition’s annual Road to Recovery Conference & Tribute in Orlando, which was attended by more than 100 wounded warriors and their families in early December.

“I’m extremely impressed by the life-changing work being done by the Coalition to Salute America’s Heroes,” said Bowman. “That’s why I wanted to fly their colors and bring more awareness to the organization and to the thousands of brave men and women that benefit from the emergency aid and other critical services they provide.”

On February 6, 1994, Bowman gained worldwide attention when he and his Golden Knights teammate, Sgt. Jose Aguillon, collided in midair during the team’s annual training. Bowman and Aguillon were practicing a maneuver known as the Diamond Track. The maneuver calls for the jumpers to streak away from each other for about a mile and then turn 180 degrees and fly back toward each other crisscrossing in the sky.

Bowman and Aguillon had demonstrated the Diamond Track more than 50 times without incident. But this time was different. Rather than crisscrossing, the two skydivers slammed into each other at a combined speed of 300 miles per hour. Aguillon died instantly. Bowman’s legs were severed from his body, one above the knee and one below. Bowman’s parachute opened on impact. He was taken to a hospital in Phoenix where doctors closed his leg wounds and stopped his internal bleeding.

Nine months later, Bowman turned this tragedy into a triumph when he became the first double amputee to re-enlist in the United States Army. He later became the U.S. Parachute Team’s lead speaker and recruiting commander.

“During my tenure at the Coalition, I’ve met hundreds of inspirational men and women that have overcome adversity and gone on to be a beacon of light to their fellow veterans,” said David Walker, President & CEO of the Coalition to Salute America’s Heroes. “Dana has to be at the top of that list. He is truly an extraordinary man, and we are so proud that the Coalition is riding along with him at these bowl games and other events still to come.”

Since its establishment in 2004, the Coalition to Salute America’s Heroes has provided an invaluable lifeline to thousands of America’s combat-wounded veterans. The Leesburg, VA-based organization is distinguished from other veteran-focused groups by its direct financial assistance to America’s wounded heroes. Its Emergency Financial Aid program has stopped foreclosure proceedings on veterans’ homes and kept their vehicles from being repossessed. The organization regularly provides gift checks to cover meals, medical and utility bills, clothing, car repairs and even baby diapers.

For more information on Dana Bowman and Team Fastrax, and to book him for a dive or speaking engagement, visit www.danabowman.com or www.teamfastrax.com
Contact
Coalition to Salute America's Heroes
Ladd Biro
817-675-3499
www.saluteheroes.org
Champion Management is proud to be the Coalition's PR agency of record. 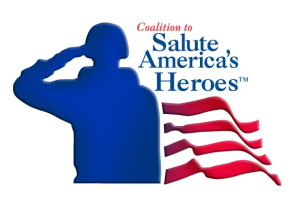