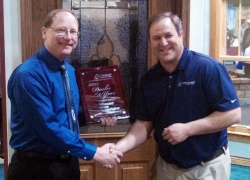 Clintonville, WI, March 25, 2014 --(PR.com)-- Advanced Home Technologies (AHT), the Clintonville, WI based window and door retailer, was awarded 2013 Dealer of the Year accolades by manufacturer Compozit Windows & Doors. This marks the second consecutive year that AHT has been honored with this award, which was presented to owner Scott Young by Duane Belisle, Compozit Windows & Doors Regional Sales Manager.

Compozit Windows & Doors’ Charles L. Smith said, “AHT’s sustained excellence in selling & servicing products at a world class level is a testament to their hard work, dedication and professionalism. They continue to be an active and valuable participant in encouraging, teaching and setting an example for our entire dealer group, and we’re proud to present them with this honor for the second year in a row.”

Scott Young’s father started the family business in 1967. Scott has been involved in the business in several capacities over the years, assuming sole ownership in 1999.
Contact
Compozit Windows & Doors
Clint Carraro
502-968-2020
thv.com