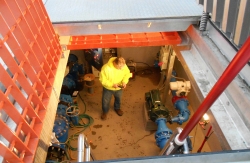 Rentricity’s Flow-to-Wire system captures excess pressure and flow within gravity-fed water distribution pipelines, converting it into clean energy for the electric grid or the customer's onsite use. The site located within the water distribution system of Barre was included as part of an upgrade to a pressure regulator vault and highlights Rentricity’s capabilities for managing pressure while recovering energy within pressurized water systems.

“The City of Barre would like to thank the Vermont Clean Energy Fund and our developer Rentricity for working with the City over the past few years in a logical fashion to help make our water system more sustainable,” says Steve Mackenzie, City Manager. “Barre hopes this will serve as an example to other Vermont cities and water intensive industries in the state that use gravity-fed water." Rentricity’s technology is now available in sizes as small as 5kW for industrial water users like food and beverage processors and large data centers that use cooling water.

“Rentricity is proud to have been part of this clean energy project in Vermont which is the Company’s first in the state" said Al Spinell, Co-founder and Advisor. “ The Company continues to see rising interest in the high capacity and strong paybacks in Rentricity’s in-pipe hydro solution which can provide predictable clean electricity to the grid or within buildings," he added.

The installation is also Rentricity’s first following the new regulations associated with the Hydropower Efficiency act of 2013, a law passed last year to streamline regulatory processes for small hydro projects that have zero impact to the environment. The project represents and advanced regulatory structure in New England for in-pipe hydro; a standard that needs to be copied in every state with a Renewable Portfolio Standard. Net-metered in-pipe hydro systems like Barre’s represent highly efficient and predicable distributed generation for local grids seeking to be innovative.

In addition to the Barre Project, Rentricity will be commissioning a 325kW site in Palos Verdes, California, a 30kW site in Nova Scotia, Canada, and a 12kW site in North Wales, Pennsylvania later this year.

About Barre City, Vermont
The City of Barre is the eleventh tenth largest community in Vermont and is located on the eastern edge of Washington County. The City has a total population of 9,052.
Contact
Rentricity Inc.
Frank Zammataro
732-319-4501
www.rentricity.com