Colin Fletcher Announces the Release of His First Book Examining the Issue of Race, "I Am Not African American" 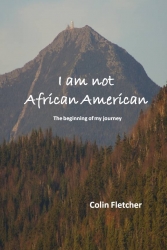 Middletown, CT, August 15, 2014 --(PR.com)-- Colin is proud to offer his debut work which represents his personal journey towards understanding his own identity, "I am not African American" is already available on Amazon.com and Kindle and will be hitting bookstores everywhere very soon.

"I am not African American" is an informative explanation outlining the plight of black Americans throughout the history of the United States. It focuses on how black Americans have been lumped together without differentiation for their unique ethnic origins. In particular, Colin clarifies who black Americans of slave origins are, presently labeled as, for lack of a better term, African Americans, and why they are different from the other blacks who immigrated to America. He examines how their unique history of persecution and oppression has resulted in all blacks, for that matter, all people of color, are frequently treated as non-Americans. But also, Colin further emphasizes what important roles many black Americans have played in the history of this great nation.

By specifically focusing on the speeches and writings of Reverend Dr. Martin Luther King Jr., "I am not African American" illuminates the fact that Dr. King’s dream of seeing all Americans aspire to reach the Mountaintop can never be fulfilled if we do not understand and acknowledge the long journey African Americans have taken towards making this nation a “more perfect union.” Only through their achievement will America be able to live up to its creed of “All men are created equal…”

Being a Jamaican American allows Colin to view race relations from a different perspective. He understands the necessity for unity against those who tried to oppress; however, through his own life experiences believes that we as a nation have reached a moment in our history where without proper delineation, our children will never be “judged by the content of their character.” They will continue to struggle against those who believe that America is simply a place which can only be represented by a single face.
Contact
I am not African American
Colin Fletcher
860-759-8985
www.iamnotafricanamerican.com