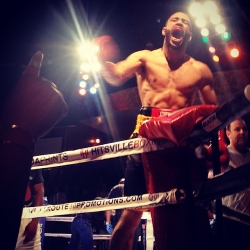 New York, NY, February 27, 2015 --(PR.com)-- Middleweight Jonathan Cepeda 17(15) - 1(1) - 0 scored an impressive first round TKO over hard hitting middleweight Laatekwei Hammond 21(14) - 9(9) - 0 at The Mansion Club in Atlanta, Georgia on Sunday 2/22. After viscously knocking down Hammond three times within the first 1:39 seconds, referee Brian Slutts stopped the fight which was scheduled for 10 rounds. Hammond actually had to be lifted up from the floor by the ref and his manager after a brutal assault by a Cepeda.

Joe Kran, President of Kran Sports and Entertainment Management, stated that "Cepeda is a real smart fighter. Jonathan has learned how to maintain his very aggressive, crowd pleasing style while being in complete control of his actions." Pleased the crowd was as they rose to their feet in an uproar as Cepeda did a victory dance.

Cepeda commented after the fight that Hammond was "in the best shape of his career and definitely came to fight. He knew that I had great power, but he was surprised by my speed. I was able to hit him from a lot of different angles which he wasn't able to defend."