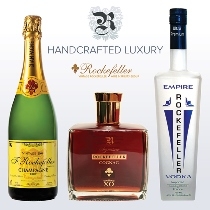 Lewis is best known for his role as Managing Director at TBWA/Chiat/Day, the Absolut Vodka advertising agency, which launched the campaign that put Absolut on the map toward becoming the world’s leading premium spirit.

He was responsible for creative, strategy and marketing the iconic advertising campaign that Advertising Age named the 7th best in the 20th Century. (Lewis claims it should have been 5th best but he doesn't quibble.)

Lewis published two books about the campaign, including the New York Times bestselling "ABSOLUT BOOK," which sold half a million copies.

Bombay Sapphire Gin, Grand Marnier, Chivas Regal, and Glenlivet were among the other brands he led. Recently, he was a consultant on the development of Purity Vodka.

“The Vintage Rockefeller team is a very smart and motivated group. Perhaps, I can make them a tad smarter,” Lewis offers. CEO Steve Goldberg asks, “Who wouldn't want Lewis?”