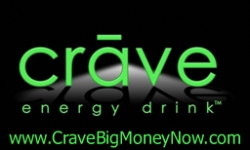 Calgary, Canada, December 17, 2007 --(PR.com)-- Brad & Kelly Smith of Crave Team Canada announces the release of Crave Energy drink (http://www.CraveBigMoneyNow.com) through health and wellness company, Vitamark International. Crave was developed by the original formulator of the popular energy drink Red Bull. Crave energy drink is said to be launched in about one week's time and already has many people eagerly on order for it's arrival.

Crave is backed by a full United States patent and three patents-pending. It is a natural alternative to the popular energy drinks offered in regular stores. Crave energy drink is said to even be safe for dieters and diabetics. It contains thermogenic technology so it will burn fat, no crash, no headaches and no jitters. It's also offered at the fraction of the cost of leading energy drink brands.

"We liked the fact that Crave energy drink is taking the Internet by storm with a company that was founded in 2002 by people who have a proven track record and have been working together for about twenty years. That is a powerful combination," said Team Canada member Kelly Smith.