Great Story Happening in NYC This Week: First Woman to Travel to All Countries to Speak at NYU

First Documented Woman to Travel to All 196 Countries in a Guinness Record Attempt to Speak at NYU This Week. 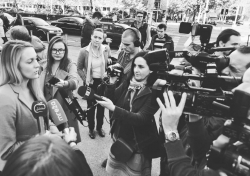 New York, NY, February 09, 2016 --(PR.com)-- “Our generation, ‘The Millennia’s’, have a unique opportunity to change the world with the internet and instant communication which has no borders. We are all connected and my journey is showing that connection. Millennials can unite the world,” says 26-year-old Connecticut native Cassandra De Pecol, who will be visiting New York City on February 11th, as part of her Guinness World Record-setting Expedition that includes stopovers in 196 countries.

Dubbed, “The Peaceful Travelers Journey”, Ms. De Pecol is attempting to become the First Documented Woman to Travel to 196 Nations in record time to set a Guinness World Record. In the process, she wishes to promote peace and sustainability claiming that Millennials can unite the world.

As part of her tour, she also hopes to demonstrate that her generation can create positive, peaceful relations with all countries, in part through sustainable tourism, which brings cultures together and makes a positive impact on the environment, society and economy. An educational documentary will follow upon successful completion of her Expedition.

Visiting each country as an Ambassador of the International Institute of Peace Through Tourism (IIPT) and Skal International (the world’s largest not-for-profit multi-discipline travel and tourism organization), Ms. De Pecol is planting trees and collecting water samples for the Adventurers and Scientists for Conservation project, to then test for microplastics.

During her stay in New York, she will be meeting with Skal NYC, attending a gala dinner and hosting an Assembly with University Tourism students at NYU on Thursday. She will also be a guest speaker at Central Connecticut State University in Connecticut during her short stay.

“Tourism is one of the only industries in the world that has seen constant growth over the past 25 years with over 1 billion people traveling in 2014,” states De Pecol.

“By traveling and meeting others and being accepting of different cultures, traditions and beliefs we can break down the barriers of mistrust and suspicion and really start a drive to a better and more humane world where people just simply enjoy and embrace the differences amongst us,” she added.

Cassie is originally from Connecticut and was in most newspapers prior to her departure. She now hopes to inform the citizens of New York City of her updates which includes having visited 80 countries within 6 months, presenting to over 5,200 students and dignitaries across 14 countries, and planting 9 trees across 8 countries.
Contact
Expedition 196
Cassandra De Pecol
203-739-5161
www.expedition196.com

First Documented Woman to Travel to All 196 Countries in a Guinness Record Attempt to Speak at NYU This Week.