Abuse of Power is Becoming Commonplace by Government & Courts Since 9/11, Says A Just Cause 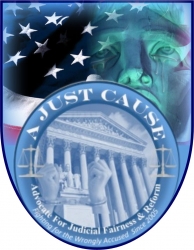 Denver, CO, March 01, 2016 --(PR.com)-- "Irrespective of a terrorism investigation, the federal judge who, in essence, ordered Apple to write software to assist the government with hacking into the San Bernadino's terrorist's cell phone sets a dangerous precedent that courts force someone to labor for the government," says Banks.

"Forcing Apple to work for the FBI is akin to forcing an individual to assist law enforcement with a criminal investigation after a police department has issued a request to the public for help," says Lamont Banks, Executive Director of A Just Cause. "While we are sympathetic to the government's position and don't want to weaken their ability to fight terrorism, neither Apple nor any other citizen has an obligation to work for the government and forcing them to do so violates the 13th Amendment's prohibition against involuntary servitude," exclaims Banks. "Incidents of government abuse and misuse of laws, especially related to national security issues, have become commonplace since the 9/11 attacks," charges Banks.

In 2006, FBI Director Robert Mueller testified before the Senate Judiciary Committee that federal agents had abused the use of the Patriot Act's National Security Letters (NSL) for domestic investigations. An NSL is a demand letter which is used primarily by the FBI without court authorization to gain access to business and banking records. U.S. Senator Patrick Leahy (D-Vermont), said the FBI's abuse of NSLs was "systemic." "NSLs were likely used to illegally gain access to the Colorado Springs Fellowship Church (CSFC) and parishioner banking records in the IRP6 case," says Cliff Stewart, A Just Cause.

On June 2, 2010, Colorado U.S. Attorney spokesperson, Jeff Dorschner told a local news station that the church was not the target of the criminal investigation. Court records show, however, that grand jury foreperson said that Rose Banks, the Pastor of CSFC, was the target of the investigation. Grand jury transcripts from 2007 not only show a grand juror asking FBI Special Agent John Smith where he got the church's banking records but the federal prosecutor peppering church members with questions about the church and Pastor Banks. Smith told the grand jury he received the banking records via subpoena, however, discovery documents show that some of the 8000 pages of church and parishioner banking records were obtained as early as 2003, four years prior to the grand jury. Court records also show Assistant U.S. Attorney Matthew T. Kirsch stating: "Even if the records were illegally obtained," it was not relevant to the IRP6 case. "Given that the grand jury didn't issue the subpoena, it is certainly reasonable to conclude that the records were illegally obtained by NSLs or some other unlawful method," argues Stewart. "Evidence also shows that Agent Smith lied on a search warrant affidavit to illegally gain access to IRP Solutions business records and intellectual property," asserts Stewart.

FBI Agent Smith in a search warrant affidavit stated IRP Solutions was a "purported" software development company even though he was aware of a demonstration 2 months prior to the raid where 4 FBI agents were in attendance with numerous other federal law enforcement agencies, one of whom confirms seeing the software in the affidavit. Prior to the raid, Smith also received an affidavit from retired immigration and customs official Gary Hillbarry who was working as an independent consultant with IRP. Hillbarry stated, "IRP had a truly viable product."

"The FBI and U.S. Attorneys systemic abuse of various laws and their 'ends justifies the means' approach to law enforcement has damaged their reputation and much of the public just doesn't trust them not to cheat," says Banks. "The IRP6 volunteered to work on behalf of the Department of Homeland Security and NYPD to strengthen national security by making good faith modifications to their CILC criminal investigations software," says Banks. According to former federal Judge H. Lee Sarokin, who reviewed trial transcripts, the IRP6's constitutional rights were violated and they were indicted, prosecuted and convicted for a "failure to pay corporate debts" incurred from those modifications. "The FBI and Colorado U.S. Attorneys Office cheated the IRP6 out of a constitutional rights, cheated their church and fellow parishioners out of their banking records, cheated six men out of running their business and cheated them out of their very freedom," laments Banks. "What will Apple, other technology companies, the public, and our privacy suffer from working with a sometimes brutish government that seems unconcerned with the official's misconduct, our constitutional rights and personal liberties," concludes Banks.