Langson Energy Inc. awed over 100 onlookers who saw how they use waste saturated steam pressure to make green electricity at an ethanol plant in SD. This is the first time this award-winning company’s latest green steam technology has been installed in the US. Langson’s low cost, scalable clean energy production units are significant to the global energy landscape because traditional turbines have difficulties with saturated steam, but the Steam Machine seamlessly converts it to clean power. 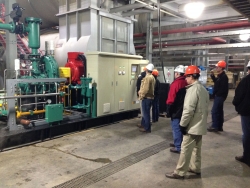 Newport Beach, CA, April 13, 2016 --(PR.com)-- Langson Energy Inc. (LEI) awed over 100 onlookers over a 2-day period as they invited city officials, ethanol plant operators and owners to witness how they use waste steam pressure to make green electricity at an ethanol plant in South Dakota. This is the first time this award-winning company’s latest green steam technology has been installed in the United States. Langson’s low cost, scalable clean energy production units are significant to the global energy landscape because traditional turbines have difficulties with saturated steam, but the Steam Machine seamlessly converts it to clean power.

It took only 3 days and a few personnel to install a 250kW Steam Machine in the ethanol plant’s boiler room. The plant currently produces a million gallons of ethanol a year and planes to increase their production to 1.5 million gallons per year. It is important to plant management to increase their sustainability by improving energy efficiency, to reduce emissions and reduce their energy costs. The Langson Energy Steam Machine is exactly what they need to help them achieve these goals.

1. Often natural gas comes into a plant at a high pressure that needs to be dropped to a useable, lower pressure level which can be done by circumventing the typical pressure reduction valve (PRV) with Langson Energy’s Gas Pressure Letdown Generator (GLG).

2. One of the greatest advantages of using the GLG is to provide cooling from the natural Joule–Thomson effect when the pressure of a gas is reduced (like the cooling that happens when a can of spray reduces the pressure of its contents). This cooling may even eliminate the need for refrigeration equipment and the consumption of more energy required by refrigeration for plant processes or air conditioning. Did you know ethanol plants also manufacture dry ice from the captured CO2 released during the fermentation process?

3. In dry milling ethanol plants, the entire grain is first ground into “meal” which is slurried with water to form a “mash.” The mash is processed in a high-temperature cooker (boiler) to reduce bacteria levels ahead of fermentation. This presents another opportunity – namely, Langson Energy’s new Steam Machine like the machine first installed in South Dakota this week. After some experience with the 250 kW Steam Machine, this ethanol plant plans to generate at least another 2 MW (8 times more) of green electricity.

Founder and inventor, Richard Langson’s insight into compression and expansion technology was developed while building and driving his super charged race cars. His fuel car, the “Texas Ranger,” still holds a world record. Langson went on to win the 1993 IHRA World Championship by beating “Big Daddy” Don Garlits. This drag racer brings the same world champion mentality to the world of energy efficiency.

The Steam Machine is the third product LEI has introduced from its steam, ORC and gas twin screw expander line. Langson Energy’s technology is integrated with proven components that have a history of reliable, robust, low-maintenance performance. Langson has solved the challenges of expensive steam turbine solutions for generating power. Traditional turbines have been the accepted method for generating power from steam pressure for many years. However, high capital costs and difficulty in handling wet steam have proven to be significant hurdles to running saturated, contaminated steam, two-phase fluids and geothermal brine. The Steam Machine has significantly lower capital costs than all other steam turbines. The LEI Gas Letdown Generator (GLG), developed earlier, won the bronze Edison Award, for “Best New Green Technology.” The GLG converts natural gas letdown pressure to power like the Steam Machine converts various steam types to power and Langson’s “ORC” Organic Rankin Cycle produces power from low temperature waste heat. In addition, the product line has been approved by the Department of Defense for use on military bases.