Lithium Boost announces the successful installation of its innovative lithium-ion battery solution in golf carts manufactured by Polaris and GEM, and shares its customer’s testimonials. Following long periods of driving and testing their LSVs, the customers reported enhanced performance, including doubling the range, and expressed continuous satisfaction from Lithium Boost solution that eliminated the maintenance hassle and moreover, shortened charge time, which means cut in electricity cost. 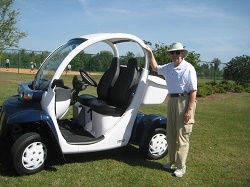 San Diego, CA, August 23, 2016 --(PR.com)-- Lithium Boost Technologies Inc., the leading provider of powering systems for low-speed electric vehicles (LSEVs) based on its patented technology to monitor and balance Lithium-ion batteries, today announced the successful installation of its integrated battery solution in golf carts manufactured by Polaris and GEM (Global Electric Motorcars LLC, was acquired by Polaris Industries Inc. (NYSE: PII). Following long periods of driving and testing their LSVs, the customers reported enhanced performance, including doubling the range, and expressed continuous satisfaction from the Lithium Boost innovative solution, which they now recommend to other users.

"Charging times on trips as long as 38 miles have been 4 hours or less. This is less than half as long as the GEM gel battery charging times for trips of 20 to 25 miles. Travel during the summer when Florida temperatures are warmer does not appear to have any significant impact on distance or charging times. I am very satisfied with the performance of my Lithium Boost system,” said Joe Waddell of The Villages, Florida, who installed a Lithium Boost 72V 180ah system in his 2014 GEM e2 low-speed vehicle in coordination with his GEM dealer.

“As a long time GEM owner, I have a love/hate relationship with my GEM. I have always loved the way it handles and drives… the safety factors are not matched …I have always hated having to worry if my batteries would last long enough to get me home…Well, a year ago, I replaced the standard batteries with a set of Lithium Boost system. Now, instead of charging my cart every night, I simply recharge it once a week. I can easily drive 30-35 miles a week without recharging… In fact, I have many times driven my cart over 40 miles in a single day without recharging with no problems. My 10-year old cart now drives better than new. The batteries have changed how I view and use my cart… When I had questions, the people at Lithium Boost answered them quickly and professionally. Their response and service have been superb. From my standpoint, I would highly recommend Lithium Boost and their battery replacement system for all GEM owners,” said Mike Pelle, of The Villages, Florida who installed by himself the 48V, 100ah Lithium Boost system in his 2006 LSV GEM.

Lithium Boost’s solution was also installed 2 years ago in a Polaris hunting vehicle for Chester Williams from Texas who wasn’t getting the mileage range he needed from his lead acid batteries and was concerned that their acid corrosion was destroying his cart. Chester has two sets of Lithium Boost 48V, 200ah systems installed in his cart. Depending on terrain and the load he carries, he can get ~100 miles on a single charge cycle, which is also faster compared to lead acid. With the Lithium Boost system he can trust his vehicle to get him back home from a long hunting trip as after driving about 50 miles he switches easily to his second battery system.

“Our systems were so far installed in over 700 LSEVs and we’re glad to have these early adopters who understand the value of advanced lithium-ion technology and can enjoy its benefits amidst initial new product introduction challenges,” said Sam Lev, Lithium Boost’s CEO. “Our core competency is the patented BMS and smart chargers system that was designed to optimize and control charging/discharging in order to yield maximum stored energy and assure long life cycle of lithium cells. We experience a growing market demand for our solution that was proven successful in the field for long run.”