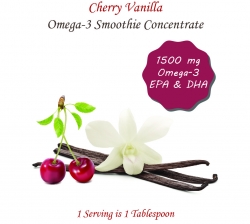 Pomona, CA, September 15, 2016 --(PR.com)-- Virun® Nutra-Biosciences® (Virun) an innovative technology formulation solving supplier and contract manufacturer set to showcase an underwater experience with a yellow submarine booth. The concept came to fruition for two reasons. The first is Virun’s ability to “IMAGINE” combined with their extensive IP portfolio used to produce Omega-3 liquid, powder concentrates and finished products. To further their submersion within industry, the company will feature a tasting poll to find the next Omega-3 smoothie concentrate flavor.

“Virun is not your everyday formulator. We have some of the most innovative people in the nutrition industry working for us. We have fun solving complex ingredient profiles that have been traditionally impossible to formulate into food and beverage products such as Omega-3s,” said Philip Bromley, CEO of Virun. “Having a tasting poll featuring Omega-3 smoothies at SupplySide West inside of a yellow submarine shows the industry how we breed innovation through action. We will show industry the true meaning of the term, ‘IMAGINE.’ And let’s face it, a yellow submarine is pretty cool too.”

The Omega-3 smoothie concentrates are coming at a great time for the Omega-3 market. According to Hexa Research, the global EPA/DHA market is expected to reach $4 billion by 2024. A majority of the growth is attributed to functional foods fortified with Omega-3s which have brain, joint and cardiovascular health benefits.

Each concentrate will have up to 1500mg mg of Omega-3 EPA and DHA within one tablespoon. The Omega-3 smoothie concentrates are great options for consumers who hate taking pills or people who have difficulty swallowing. Consumers can easily incorporate the benefits of Omega-3s into their everyday food regime.

Booth visitors will have an opportunity to help Virun formulate by casting a vote for their favorite Omega-3 smoothie flavor. The winning flavor will become a featured product of Virun and made available to companies who want to bring it to the consumers.

We All Want to Live in a Yellow Submarine at Virun's SupplySide West Booth!