An opportunity to introduce Thailand's number 1 MMA organization to a North American audience. Owned and operated by Boston native Jon Nutt, Full Metal Dojo has had 12 events since it's inception in 2014. Nutt, an ex-pat since 2005, speaks and sings fluent Thai and is expanding the Dojo into Asia. Consequently, he is 2-1 as a fighter and promoter. 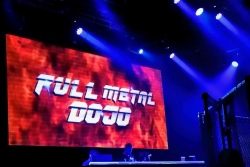 Chinese television and North American television contracts are in the works, but the press should learn about this burgeoning organization that's not competing with the UFC, but creating a different outlet for viewers from all ages, nationalities and walks of life who are fans of the sport of fighting.

Run by Jon Nutt, the owner, promoter and occasional combatant, the Dojo is about Masculinity, Hope and Responsibility. Jon Nutt personifies it. A bit controversial, always entertaining, Full Metal Dojo is bringing a new face and vibe to mixed martial arts.