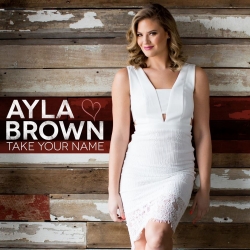 Nashville, TN, February 10, 2017 --(PR.com)-- "Take Your Name," the new single from national recording artist, Ayla Brown is being released in time for the Valentines round of marriage proposals.

"Take Your Name" is a catchy song about being in love with someone, and despite the ups and downs of relationships, the desire to come together as one and take on their significant others last name.

"Take Your Name" is a catchy country-pop song being released on all digital formats on February 14th.

Ayla Brown is a national recording artist, has performed at the Grand 'Ol Opry, overseas for 1000's of Troops, on Fox And Friends and most recently performed the National Anthem at the Republican National Convention.
Contact
Ambient Entertainment LLC
Ayla Brown
615.784.9155
www.aylabrown.com
Dan Esposito
Management
215.740.0757