The Robin Hood Foundation pulled together its community of donors to support fellow New Yorkers.  The Chauncey F. Lufkin III Foundation was privileged to offer a helping hand as Robin Hood volunteers for the annual Homeless Outreach Population Estimate (HOPE). 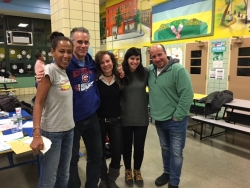 On the night of the HOPE count, the NYC Department of Homeless Services (DHS) assembles thousands of volunteers who are sent out in teams to canvas our streets, subways and parks. HOPE is a point-in-time estimate of unsheltered individuals used to project service needs, allocate resources for the street homeless population, and educate and engage New Yorkers about this serious issue affecting us all.

“Our foundation’s focus is on fighting poverty through better education and by finding faster cures for the diseases that affect loved ones. By extension, the homeless are especially impacted by these issues and we aim to do our part in improving the lives of those in distress with both our financial donation and our human capital contributions. Robin Hood does an excellent job in guiding us, helping to maximize our commitment to more effectively alleviate poverty in New York City,” said Chauncey Lufkin, Founder of The Chauncey F. Lufkin III Foundation.

The evening began with a briefing by former Speaker of the City Council, Christine C. Quinn, who now serves as Executive Director of Women in Need (WIN). WIN is New York City’s largest operator of family shelters. Following Christine’s remarks, DHS’s John Henry Greenwood, the Executive Director of Planning and Procurement, Family Capacity for the City of New York, provided the group with the training necessary to perform the count.

The Chauncey F. Lufkin III Foundation and fellow team members walked quadrants of the Meatpacking District and the West Village, walking approximately six miles from midnight to 3:00AM, during which time the team counted five homeless individuals, offering them City shelter.

The City’s Department of Homeless Services estimated that this particular volunteer site, located at PS 41 at 116 West 11th Street, counted approximately 50 homeless individuals across that site’s designated areas. Over the next few months, the City will compile the numbers from over 300 volunteer sites throughout the five boroughs which will determine federal funding and continually evaluate and improve the programming designed to help street homeless New Yorkers.

“This was an extraordinary, meaningful experience – one that I will always remember. I am honored to have had the opportunity to join fellow Robin Hood volunteers in helping to perform this important annual survey and fully endorse the HOPE count’s official tagline, 'Everybody Counts.' We all need to help in any way that we can and never forget about our fellow New Yorkers in need of this City’s assistance,” said Cara Familet, Foundation Director for The Chauncey F. Lufkin III Foundation.

Here is some additional information provided by the City’s official website for the HOPE count:

“The HOPE count serves to increase public accountability and continually evaluate and improve the programming designed to help street homeless New Yorkers. The City employs a rigorous methodology endorsed as the 'gold standard' by the U.S. Department of Housing and Urban Development.

"New York City has been nationally recognized for its efforts in addressing this multi-faceted issue and has made HOPE an integral part of the City’s approach to addressing street homelessness.”

In April, Robin Hood will host its donors to hear a panel of experts for a further discussion on the many sides of homelessness.

About Robin Hood
Robin Hood, New York's largest poverty-fighting organization, creates and funds over 200 of the most effective programs, to help 1.8 million New Yorkers learn and earn their way out of poverty. Robin Hood's board underwrites all operating costs, so 100% of every donation goes directly to serve New Yorkers in need. www.robinhood.org
About the Chauncey F. Lufkin III Foundation
The Chauncey F. Lufkin III Foundation is a charitable organization founded in 2006 dedicated to improving the quality of life for individuals around the world. Our foundation’s focus is on fighting poverty through better education and by finding faster cures for the diseases that affect loved ones. Our strategy is to comb the globe for private independent foundations effectively working on these issues, supporting them with financial injections that make a difference. To date the Foundation has lent their support to numerous organizations including The Robin Hood Foundation, The Milken Institute, The Boys and Girls Club of Palm Beach County, Quantum House of Palm Beach County, St. Jude Children's Research Hospital, The Aspen Institute, and BizWorld. Mr. Lufkin has also established The Chauncey Lufkin Endowment for Academic Excellence at Southern Methodist University and is a major contributor to St. Lawrence University. www.cfl3.org
Contact
The Chauncey F. Lufkin III Foundation
Cara Familet
917-855-8153
www.cfl3.org
Please note our website is currently under construction. 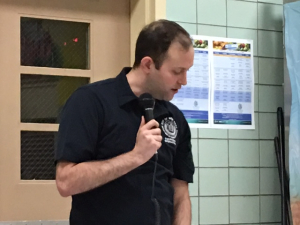 DHS’s John Henry Greenwood, the Executive Director of Planning and Procurement, Family Capacity for the City of New York.