Sunscreen’s Impacts on the Environment and Our Health – Stream2Sea Answers, “What is Reef-Safe,” as the Only Mineral-Based Brand Tested and Proven Safe to Coral Larvae 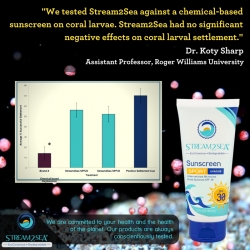 Wauchula, FL, April 27, 2017 --(PR.com)-- Dr. Craig Down’s of Haereticus Laboratory conducted extensive research analyzing the impact of sunscreen products on coral reef systems. His work, presented at the Coral Reef Symposium in Hawaii in June of 2016, brought researchers, formulators of personal care products, marine biologists, and divers to a greater awareness of this growing concern. These findings, now well-documented, were a part of the impetus that motivated a group of Hawaiian legislators, including state Senator Will Espero to propose a bill which would ban products containing chemicals found to be harmful to coral reefs and marine life.

The chemical most often referenced in this list of chemicals is “Oxybenzone.” It has become the buzz word over the past several months in news reports and among producers of products that contain the UV inhibitor as an active ingredient. Publications continually surface with titles such as, “Is your sunscreen oxybenzone-free?” It is a benzophenone, an endocrine disruptor and has been proven time and time again, even in student science fair projects, to kill corals as well as sprouting plants, and is the most common UV inhibitor used in sunscreen formulations.

It is not, however, the only benzophenone on the block. There is another named, “Avobenzone,” which many companies use in an effort to state they are “oxybenzone free,” yet it also carries risks. It too should be avoided in formulation and use. To be truly reef-friendly, other ingredients to avoid include:

Mineral-based Stream2Sea sunscreen and body care products, are formulated by Autumn Blum, a cosmetic chemist and certified dive instructor who has been an ambassador to the oceans and marine life throughout her award-winning career. She created Stream2Sea specifically to protect the coral reefs, marine life, shore life, waters (both fresh and salt) and the health of people.

During formulation it was her goal to prove, beyond a shadow of doubt that her products were truly safe in these environments. She began with formulations using popular natural standards and then submitted to third party testing. For every formula that was found harmful, she went back to the drawing board and started over. Not until she had products that were proven safe in an aquatic environment, safe to down to C.elegans and coral larvae and readily biodegradable, did she release them.

Currently, Stream2Sea is the only mineral-based brand that has submitted its products to this level of rigorous testing and standards. The health of the planet is the primary concern for Stream2Sea, focusing much of their work, research and efforts in clean-water standards, purity, and the understanding of water toxicity. Stream2Sea strongly believes that consumers have the right to know how the ingredients in the products they use can impact them and the world around them. They carry a policy of total-transparency in ingredient disclosure and packaging. They also package their products in sugar cane resin tubing to reduce their carbon footprint by avoiding petroleum-based plastics.

Stream2Sea’s concern for the environment extends to their employees as well, wanting to work with individuals who have studies, work history or volunteer efforts towards environmental issues. Heather Lahey-Jeffries, Director of Consumer Outreach, has been invited to participate on a discussion panel in Washington, DC on May 9, 2017 at the Blue Horizon Summit for sunscreen and coral reefs. Her background in engineering working with water treatment plants, power plants, public water and environmental writing opened the door for this honor. Other esteemed members of this panel include Dr. Craig Downs and Joseph DiNardo, VP and Chief Scientific Officer of Priori.

Stream2Sea has set a new standard for EcoConscious sunscreen and skincare. Along with standard human safety and SPF tests, Stream2Sea products are proven to be biodegradable in both salt and fresh water. Formulated with powerful antioxidant blends and certified non-nano titanium dioxide to protect skin from sun damage. The product line includes sunscreens, conditioning shampoo and body wash, leave-in conditioner, nourishing body lotion and lip balms. Stream2Sea products are currently available online at www.Stream2Sea.com or ask for them at your favorite health food store, dive shop or outdoor retailer. Connect with Stream2Sea on Facebook, Instagram, Twitter and YouTube as @Stream2Sea or call (866) 960-9513.
Contact
Stream2Sea
Heather L Jeffries
863 473 4223
https://www.stream2sea.com