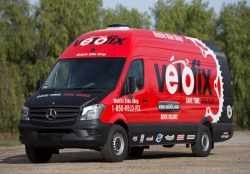 Jacksonville, FL, April 27, 2017 --(PR.com)-- velofix has officially launched in Jacksonville, FL under the ownership of US Military Veteran and Jacksonville local Ryan Peterson. Peterson served 22 years for the US Military which included 8 years in the US Army/National Guard and 14 years in the US Air Force - he still currently serves in the Air National Guard. Throughout his service he was deployed all over the world, including two trips to the Middle East supporting Iraq and Afghanistan operations.

In 2016, Peterson decided it was time to start a new venture and made the decision to purchase the Jacksonville territory to operate a Mobile Bike Shop business, velofix. The business offers service, parts and accessories for all types of bikes to cyclists with one big difference – the bike shop goes to the customers at their home or office.

Peterson says, “I have always been interested in starting my own business, but was challenged determining what kind of business would be a good fit. I wanted to invest in a company that my heart truly believed in. Over time and throughout my experience, I’ve discovered life is too short to be stuck doing something you don't enjoy, so after many months of research my wife and I made the decision to join the velofix team.”

velofix Jacksonville’s goal is to give cyclists more time to do what they love – ride.

Peterson continues, “For me it’s very exciting to own my own business which has defined a completely new approach to doing business in an industry that has been very traditional for a very long time. I love seeing my customers light up when they experience the convenience and see the value that velofix brings to them.”

When asked how his military experience relates to his new venture, Peterson says, “Always take care of people first; you cannot accomplish the mission without having a highly motivated, highly trained team working together as one cohesive unit. The same applies to all aspects of small business from how you treat your employees, your customers and your business partners, you have to build relationships and trust, and work together as a team. Also be professional, have a keen attention to detail and do your job right the first time – it’ll save headaches later on down the road.”

velofix has also created several strategic partnerships with leading suppliers and manufacturers allow us to deliver cutting edge technology to Jacksonville cyclists that has not been experienced before. We are providing our customers the ability to purchase top-tier brands, to include that level of manufacturer support, many of which have never been available to the Jacksonville area.

Peterson, quick to support local veterans, has already partnered with many veteran charities and community organizations such as Team RWB and Project Hero. velofix Jacksonville will help support rides and events in the area for causes in which Peterson strongly believes in. If you are interested in having velofix Jacksonville help out at your event, visit www.velofix.com/locations/jacksonville/

About velofix
Founded with a passion for cycling, Mobile Bike Shop fleet velofix was launched in Vancouver in 2012 by Chris Guillemet, Boris Martin, and Davide Xausa, who all share that passion for cycling and the common belief that bicycles can help change the world.

Featured in the New York Times and recognized on Entrepreneur Magazine’s rankings for Franchise 500, Fastest Growing Franchises and Top New Franchises of 2017. velofix has also been called, “one of the most impressive mobile franchises,” and velonews calls Mobile Bike Shops the #1 Industry Trend in 2017. velofix has also been featured on CBC’s Dragon’s Den (Canada’s version of Shark Tank), which resulted in Jim Treliving coming on board as an investor. Charles Chang of Lyra Growth Partners has also invested in velofix. Currently, 75 franchises operate in every major Canadian market and most key American markets. velofix has plans to expand to a total of 150 franchises across North America in 2017.
Contact
velofix Jacksonville
Ryan Peterson
904-274-5877
https://www.velofix.com/locations/jacksonville/