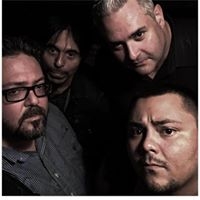 SACRED was recorded by Kevin Arndt at the Exchange Recording Complex in Milwaukee, and mastered by the legendary Ted Jensen at Sterling Sound in New York City. Their EP was released in October of 2016 to critical acclaim, and the band performed their debut concert in December of 2016 at the Historic Turner Hall Ballroom where the first 300 attendees received gift boxes stocked with limited addition walkmans pre-loaded with cassettes of the band’s debut EP and other gifts. The album can be downloaded through Apple Music at https://itunes.apple.com/us/album/sacred-ep/id1156648067 and all major online stores.

The songs “Death Note” and “Paper Cups” have been featured on commercial radio stations across the Midwest, including 102.9 the Hog, 102.1FM, 95.1 WIIL Rock, 94.1 WJJO, 96.9 The Fox, as well as non-commercial WMSE. In addition, SACRED has rotation on hundreds of Internet radio stations throughout the U.S. and U,K., and is scheduled for rotation soon on PANDORA.
Video for SACRED can be found on YouTube. Follow them on Twitter @SacredMusicBand or on Facebook at www.SACRED.band

Their set at Summerfest on July 4th at 12 Noon at the Briggs & Stratton Big Backyard is not to be missed and the band has some unique surprises in store for all attendees.
Contact
My In-House Agency
Gary A Rosenberg
414-628-4279