Plotagon is an application that allows anyone to create an animated movie in a few short steps. It's innovative user interface won last years Red Dot design award and has just been released on the Google Play Store, adding millions of Android users to the already vibrant filmmaking community. The app has been designed for both tablets and phones and is already available on PC, Mac and iOS.

Stockholm, Sweden, July 26, 2017 --(PR.com)-- Plotagon Story is an animation app with a unique user experience. The user selects a scene, creates their own actors, and writes the dialogue while adding emotions, sound effects and music. In just a short few steps, the user can create any kind of animated movie they want, and also record their own dialogue, making the app work in any language.

This app won the Red Dot design award last year and was a finalist in Fast Company's Innovation by Design has been available for PC, Mac and iOS for two years, with over one million installs worldwide. It features a custom character maker, and over 150 scenes and environments for the users to create their stories in, which can then be shared with Plotagons user community.

Plotagon is now available to download for free from the Google Play Store, giving Android users a chance to experience making films in a brand new way.

Plotagon is designed to work in the same way on desktop computers, tablets and phones, with the same user experience on all platforms. This essentially puts a powerful animation studio in the palm of your hand. The Android version has the added ability to export any scene or dialogue as an animated GIF, making it a fun way to create fantastic animated messages.

Plotagon Story is an animation studio in your pocket

Imagine an animation studio in the palm of your hand! That is what Plotagon delivers via its award-winning app that lets anyone create an animated video just by typing. 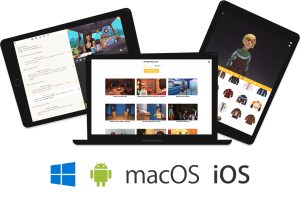 Plotagon is available on phones, tablets and desktop computers

Plotagons award winning interface has been designed to run perfectly on any platform.