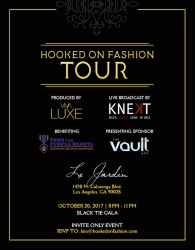 Los Angeles, CA, October 11, 2017 --(PR.com)-- KNEKT TV, an award winning live streaming and broadcast production company with a digital TV network will be working with Hooked on Fashion and Viva Lux to produce and live broadcast a luxury fashion show which will be in support of Paws for Purple Hearts. The show will feature an array of designers including Nicole Miller, Debbie Carroll, OulaLaLa Designs and Isla Aditi. Models including Lauren Ziegler (Miss United States, Miss Florida 2017), Tori Kruze (Miss Missouri USA 2018), Emilina Adams (Miss Nevada 2016) and Monika Horvat (Miss Canada 2016) will participate in a runway show and vignette style fashion showcase preceded by a star studded red carpet along with models from across the globe.

With a focus on Social Good, KNEKT TV has over 60 channels including exclusive shows spanning topics such as environment, animal welfare, health and wellness, diet and nutrition, travel, education reform, women's empowerment, sex trafficking, LGBTQ, anti-bullying and a wide breadth of content from the celebrities who support these causes.

“We are very excited to connect audiences with this very luxurious fashion show that will bring awareness to our friends doing amazing work for US Veterans at Paws for Purple Hearts. KNEKT is all about creating unprecedented access to content that is all about enriching and improving the world, in a variety of areas across the social impact spectrum,” says Elisabeth Recheis, Multimedia Expert at KNEKT TV. Recheis, in the critical role of Multimedia Expert, has highly successfully worked with KNEKT TV on numerous productions, including the “Make a Wish Foundation Power of a Wish Gala” which won the 2016 Campaign of the Year, and the premier Hooked on Fashion Show which reached 31,000,000 impressions due to her outstanding abilities. Her work/knowledge as Multimedia Expert and influential voice on social media has been critical for the success of the company.

KNEKT.tv which was founded by Award Winning Producer, Kent Speakman was made publicly available online in late 2016 is available for free on Apple TV and Roku in addition to iOS and Android apps.

“Anyone with a connected TV or smart phone can download the KNEKT tv app for free, and our mission is to improve their lives in some way. With all the negativity in the news lately its been an honor to touch millions of peoples lives with positive and uplifting content, and we are excited for the future with the shows we produce and distribute.” - Kent Speakman, CEO & Producer, KNEKT TV

KNEKT.tv is focused on improving the world by connecting audiences with shows that inspire, and bring awareness to social causes as well as enhancing and enriching the lives of its viewers with informative health and wellness content. Blending celebrity advocates and luxurious locations around the world to peak the audiences interest has connected millions of viewers to experiences and issues. Exclusive live videos and red carpet appearances are directly or indirectly bringing awareness to issues spanning Animal Rights, Human Slavery, Children’s Welfare, Sex Trafficking, obesity, mental health and many, many more.