James Beall to Win the 2018 William Meredith Award for Poetry

The William Meredith Foundation invites writers, reporters, and lovers of poetry to celebrate the 2018 William Meredith Award for Poetry. The award is presented to James Beall for his new collection of poetry, ONYX MOON published by New Academia Press. The prize is given in honor of William Meredith, former US Poet Laureate who was a good friend and colleague of Mr. Beall particularly at the Library of Congress when they organized a symposium on science and literature. 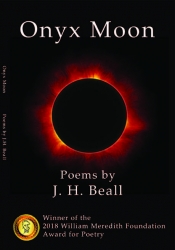 Annapolis, MD, January 09, 2018 --(PR.com)-- The William Meredith Foundation is proud to present the 2018 Award in Poetry to James Beall, physicist, poet, and professor at St. John's College in Annapolis. The award has no application process, but comes to the author unsolicited in the spirit of generosity that informed William’s interactions with the world of poetry when he judged competitions and supported new talent. A working association with Meredith is not a pre-requisite for awardees, but in Jim Beall’s case, their history as colleagues makes this year’s award particularly fitting and adds a particular glow to the serendipitous decision on the part of the board of directors in choosing Beall. The Meredith Award is only one of the artistic projects supported by the foundation to continue the legacy of this great American spirit, and in this case, recognizes these brothers in the art.

In 1978, Beall approached William at a poetry reading at the Folger Library while Jim was a Congressional Science Fellow at the Office of Technology Assessment for the U.S. Congress. Their collaboration led to The Science and Literature Symposium in 1981, with Beall as co-moderator. The program featured lectures by the the Nobel Laureate in Chemistry, George Wald, O.B. Hardison (then director of the Folger Library), Sir Fred Hoyle, Gerry Pournelle, and Gene Roddenberry of Star Trek fame, among many others.

Jim Beall is an astrophysicist, poet, and author on issues related to public policy and national defense. He holds the degrees of B.A. , M.S., and Ph.D, all in physics. He is a member of the faculty at St. John’s College in Annapolis, Maryland, and a senior consultant to the U.S. Government. His first book, HICKEY, THE DAYS was published in 1981 by Word Works, and his second book, Republic was published by Toad Hall Press in 2010. The Italian translation, Repubblica, translated by Sabine Pascarelli was published by Toad Hall Press in 2013. Onyx Moon is his third book published by New Academia Press, a very fine publisher that can hang this title high on their wall of honor.

Wind, rain, volcanoes, jungles, and mountains, appear throughout his poetry, and like Audubon he paints his subjects with exactitude of color and precision of detail. Stars shine brilliantly throughout ONYX MOON as one would expect from a physicist. In his poem, “The Fire on Magdalena Mountain,” he recounts travel to the large array of radio telescopes near Soccoro, New Mexico:

They are like flowers tracking a dark sun.
Those distant instruments listen to the sibilant
stars, stars that mimic no human speech. It is a sound
similar to the wind blowing across old ruins,
a level just beneath hearing, that conjures
beyond our capacity to understand or comprehend.

James Beall’s work is at first an enigma. What to make of his challenging vision, his unique voice, the round-about syntax, his penchant for unfamiliar diction, his seemingly schizophrenic take on the world. For here is a poet blessed with double vision, a man who sees the world with both brain and heart, who is fully at home in his bicameral mind, scientist and mystic at once.

Here we see both the careful scientific method of observation leading to a thesis as well as the appreciation of synchronicity that informs the reality of a Reike practitioner or a shaman. The two chevrons, orange-red on a blackbird’s wings at Gettysburg mirror the late sun, the way the speeches of Pericles or Lincoln help his imaginary listeners understand a cause.

In “Military Intelligence,” soldiers digging a foxhole “will make of his or her small space/ a home of sorts, as carefully in place/ as any nest or den the animals/or insects in their pantomime of thought/ would take as ease.” The soldiers here imitate the creatures around them as do the creatures imitating thought.

Friends and critics have sung Jim Beall’s praises over the years, but one thinks of Josephine Jacobsen’s poem, her shock and pleasure when she comes across a real poet, or Emily Dickenson who says you feel like the top of your head has been taken off when you meet the real McCoy. Here he is. The Foundation is so proud to celebrate this rising star, shining among us. As Dr. Spock would say, “live long and prosper James Beall.”

Announcement of this award comes on January 9th, the ninety-ninth anniversary of Meredith’s birth and 11 years after his death in 2007.

Note on the Title