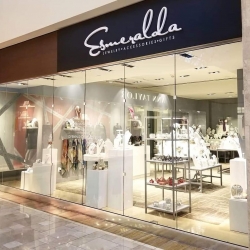 Lambert - a Babson MBA and a Babson Alumni Entrepreneur Hall of Fame “Rising Star,” whose family-owned business has been supporting and promoting artisans and other micropreneurs across the globe for the past 5 years - has expanded her eponymous accessories store with a 1,000-square-foot space next door to Bloomingdales and Kate Spade. Esmeralda Chestnut Hill is twice as large as the flagship Harvard Square shop in Cambridge, which opened in 2015 and has been named Boston’s Best Accessories by Boston’s A-List for the past two years.

“The larger space allows me room for innovation and experimentation,” says Lambert. “With Chestnut Hill, I have added three new countries and four states that I have never worked with. Core to our mission is to sustainably empower more artisan makers and family businesses. So, as I grow I am able to pull more families up with me and create a ripple effect.”

The Chestnut Hill location is Esmeralda’s third pop-up store this year, following its successful run at Boston Winter and Faneuil Hall over the past two seasons. The pop-up model has given Lambert the opportunity to test new designers and expand her existing partnerships, while ultimately growing her business.

“The pop-up store model has allowed me, as a small business, to grow my sales and test new markets and products in prime seasons, while minimizing risks of long term leases that can be risky gambles for a small company,” Lambert says. “For example, with the addition of Boston and Newton stores, I am able to triple sales with my top U.S. artisans.”

For her new location, Lambert partnered up with veteran visual merchandiser Floriane Demers, who has worked with major retail labels like Louis Vuitton, to create a store experience catered to the style and elegance that Chestnut Hill customers expect.

Esmeralda Chestnut Hill will host a Grand Opening event on Saturday, October 27 from 3PM to 6PM. The store will remain open until December 31, 2018.

About Esmeralda:
The brain child of entrepreneur and jewelry designer Esmeralda Lambert, Esmeralda is a jewelry store concept inspired by its owner’s elegant style and Latin heritage. Esmeralda’s physical locations and online store feature its very own Esmeralda Lambert jewelry collection, as well as a curated selection of other unique jewelry, accessories and gifts handcrafted by artisans and sold by family businesses from around the U.S. and the world. Esmeralda offers jewelry for every woman and occasion, including styles that range from simple every-day pieces to formal black-tie accessories.