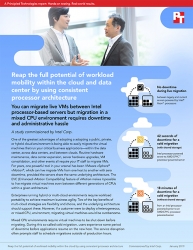 Durham, NC, March 18, 2019 --(PR.com)-- For businesses that rely on various types of cloud environments to run their applications, the ability to move VMs to one server to another offers flexibility that supports business agility. Technologies such as VMware vSphere vMotion enable live migration of VMs with zero downtime, as long as the servers share the same underlying architecture. When migrating between servers powered by processors with different architectures, the only option is to shut down the VM before migrating it.

According to the report, “If your company selected servers powered by the AMD EPYC processor, you would not be able to carry out live migrations between existing servers powered by Intel processors and the AMD processor-based servers. The data center would, in effect, have two separate pools of servers and the mobility of VMs would remain limited for the life of those servers.”