Alan Roger Currie, known to his fans and clients as "The King of Verbal Seduction," will celebrate the 20-year anniversary of his very first eBook next month titled "Mode One: Let the Women Know What You're REALLY Thinking," which Currie first self-published in May 1999. Currie's book was the first book in what is commonly known as the "Pickup Artist Community" and "The Manosphere" to place a high degree of emphasis on the art of developing confident, straightforward "verbal game" with women. 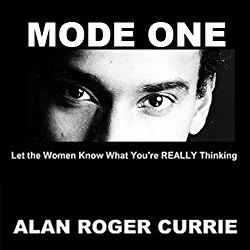 In the Attraction & Seduction Industry, which is more informally known as the "Pickup Artist Community," the concept of "game" is generally defined as the ability for a single heterosexual man to motivate a woman to agree to engage in sexual relations with him at some point in the near future without him having to spend an exorbitant amount of money on a woman treating her to multiple free lunch meals and/or dinner meals prior to him and the woman indulging in their very first episode of sex.

When a man uses "indirect verbal game" with women, this means that he will usually invest a significant amount of time in conversation with the woman building rapport with a woman and making sure that the woman perceives him as a man who is "dateable," "likable" and "trustworthy" prior to him expressing his romantic or strictly sexual desires, interests and intentions to the woman in a very cautious and usually vague and ambiguous or beat-around-the-bush manner.

On the other hand, when a man uses "direct verbal game" with women, this represents that a man will express his romantic or strictly sexual desires, interests, and intentions to a woman of interest in a fairly quick and straight-to-the-point manner within the first few minutes of his very first conversation with the woman.

Alan Roger Currie was arguably the first book author and professional dating coach to begin placing a high degree of emphasis on helping men to improve their verbal game with women, and more specifically, verbal game that is extremely self-assured, audacious, upfront, straightforwardly honest, and very persuasive, smooth, and seductive.

Currie refers to his style of strong verbal game with women as "The Mode One Approach," which Currie first began using with women back in 1984 when he was a college student at Indiana University in Bloomington, Indiana. Currie was born and raised in Gary, Indiana, and earned an undergraduate degree in Economics from Indiana University with a minor in Psychology and Theatre & Drama.

"Before I entered into what is now generally referred to as 'The Manosphere,' no other dating coach or pickup artist was really preaching bold, provocative, risqué, ultra-straightforward verbal game with women. Now, twenty years later, my 'Mode One' brand has become essentially synonymous with fearless, extremely candid, and even raunchy verbal game with women," said Currie, whose older brother Stephen first encouraged him to document the psychology behind his eyebrow-raising conversation style with women in June 1986. Currie did not put his thoughts on paper until October 1990, and he did not self-publish his first eBook available to the general public until May 1999.

Today, Currie earns a six-figure salary offering Email consultations, Skype & Telephone Consultations, and One-on-One / Face-to-Face Coaching Sessions to single heterosexual men in many countries all over the world. Currie is now the author of seven eBooks and four paperbacks, and he has narrated and produced four audiobooks that have been available on Amazon.com and Audible.com since August 2014.

"Many men in the Pickup Artist Community refer to me as 'The Godfather of Direct Verbal Game' with women, which is a nickname that is very flattering to me. Now, I hear many of the talking points from my books and freelance articles repeated and regurgitated on many blog sites and podcasts by a number of different men throughout The Manosphere," added Currie, who has been interviewed on national television, national broadcast radio, and has had his books mentioned in a few national newspapers and magazines.