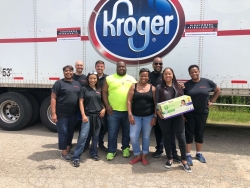 Dayton, OH, July 14, 2019 --(PR.com)-- On May 28th, 2019 tornadoes ripped through the greater Dayton area leaving a trail of widespread damage. More than 60 homes were completely destroyed, not to mention over 60,000 residents left without electricity. Additionally, the storms caused catastrophic damage to the city’s water systems, raising sanitation concerns and thousands without drinking water.

On June 14th HPC and Kroger distributed supplies to over 500 families impacted by the May 29th tornadoes. Emotions were intense as there was little notice of dry eyes; families had lost everything and it was omnipresent. The entire HPC and Kroger teams expressed how humbling it was to give back to its grieve stricken community during its time of need.

“When it was clear that families had nothing, I called our partners at Kroger who we have provided fuel into the Dayton and surrounding markets for over 10 years, they didn’t hesitate to support this joint effort beyond what they had already contributed. This is about everyday people in need, and whomever and however you contribute, you have to do something. Kroger was the right call to make.”
- Stephen Hightower, President & CEO of Hightowers Petroleum Co.

Hightower started HPC as a licensed Motor Fuel Dealer in 1984. With foresight and continuing innovation, HPC has developed distribution network with the ability to provide gasoline and diesel Nationally.

The Kroger Family of Companies has been serving communities across the U.S. for more than 135 years. Kroger’s Cincinnati/Dayton division operates food stores, pharmacies, fuel centers, warehouses and offices in Greater Cincinnati, Northern Kentucky, Eastern Indiana and Greater Dayton. We are dedicated to Our Purpose: To Feed the Human SpiritTM while creating a world with Zero Hunger | Zero Waste.
Contact
Connect Central Corporation
Kayo Anderson
1-310-405-9839