Joseph Peebles Does It Again 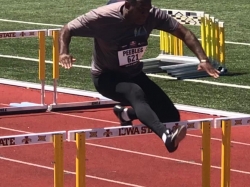 "That weekend in Ames, Iowa was brutally hot. The temperature on the track had to have been well over 100 degrees Fahrenheit. But like many of the other great Master's athletes, we all had to endure the searing heat. However, it really was a lot of fun," Mr. Peebles states.

Peebles add: "I would like to also give a huge shout out to the Iowa State University workers and the USATF officials. They, too, had to endure the blistering heat. Moreover, because of their constant standing in the hot sun as officials, they really made the meet an outstanding success. They provided plenty of water for constant hydration, a message and physical therapy tent before, during, and after the races; shuttle bus rides to and from one's hotel, and plenty of food at the concession stand. They even gave away free spikes for our running shoes and free ice cream during the meet. The free ice cream was a huge deal-maker for me," Peebles states.

"All in all, it was a great meet. I salute not only my winning team mates but also all of the hard working athletes who attended and competed within this year's event. Great job everyone," Mr. Peebles concludes.
Contact
The Peebco Energy Group
Joseph Peebles
(636) 346-7179
www.Peebcoenergy.com