Stars from two of space artist Chesley Bonestell's most famous matte painting films - Barbara Rush from "When Worlds Collide" (1951) and Ann Robinson from "The War of the Worlds!"(1953) - will shine brightly at Laemmle's Ahrya Fine Arts Theatre August 12th. 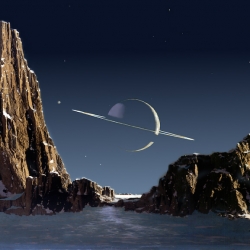 Beverly Hills, CA, August 02, 2019 --(PR.com)-- In producing, writing and directing "Chesley Bonestell: A Brush With The Future," award-winning filmmaker and eight-time Emmy Award nominee, Douglass M. Stewart Jr. takes viewers on an extraordinary voyage into the life and career of the visionary artist who, Stewart likes to point out, "took us to the Moon, not with technology, but with a paint brush." Winning a prestigious Audience Award at the Newport Beach Film Festival premiere in 2018, the film became a hit at other festivals and conventions across the country, eventually taking home two Best Documentary Awards at Comic-Con 2018 and at the 2019 Boston Science Fiction Film Festival. A popular eight screening Southern California Theatrical Premiere earlier this month has now rewarded the film with a special encore at Laemmle's Ahrya Fine Arts Theatre in Beverly Hills, California on August 12th at 7:30pm.

"This screening about The Father of Space Art is locally significant because August 12th happens to be the eve of the Apollo 11 astronaut's huge 'welcome home' tickertape parades culminating in their historic visit to Los Angeles to receive the Presidential Medal of Freedom Award," explained Stewart. "Bonestell also created his most famous painting, 'Saturn as seen from Titan (1944),' while living in Hollywood where he worked as one of the highest-paid special effects matte artists in the film industry. For this encore screening, we're assembling an especially stellar panel of guests to participate in a Q&A with the audience."

Before Bonestell inspired America to reach for the stars, his early career as an architect literally attained new heights on earth. He helped design the tallest skyscraper in New York City in 1930 - the iconic Chrysler Building - and a few years later designing the record-holder for the tallest and longest bridge in 1937, San Francisco's majestic Golden Gate Bridge. His architectural background smoothed his transition into that of a matte painter who created Hollywood movie magic for classic films like Citizen Kane, The Hunchback of Notre Dame, When Worlds Collide and The War of the Worlds.

"The documentary Chesley Bonestell: A Brush with the Future by Douglass M. Stewart Jr., is both remarkable and fascinating," said a KPFK radio Film Club Review following the film's July 15th screenings. "In part, this is because Chesley Bonestell was a remarkable and fascinating man who inspired people to majestic achievements...His paintings are speculative in nature, fueled with imagination and romantic vision, yet they make you feel like you're there, that you'd like to be there...and that you could be there."

"My film is called 'A Brush with the Future' in large part because Chesley Bonestell had a way of looking at the future and putting it on canvas," adds Stewart. "Chesley's paintings of other planets have proven to be astoundingly accurate but he also painted images of large manned expeditions to the Moon, Mars and beyond. Seeing how far we've come since Chesley's earliest space art and where we're heading to colonize the Moon with the ultimate ambition of colonizing Mars, one can appreciate that Chesley Bonestell wasn't only the future of early space exploration but remains the future for all of us today."

Chesley Bonestell: A Brush with the Future will screen at 7:30pm on August 12th at Laemmle's Ahrya Fine Arts Theatre in Beverly Hills. A very special Q&A, hosted by award-winning filmmaker Douglass M. Stewart, Jr., will follow the screening and welcome classic film star Barbara Rush from "When Worlds Collide" and Ann Robinson, star of "The War of the Worlds." Both stars appeared separately in those two sci-fi films that featured Chesley Bonestell's matte paintings. Film participant, Rocket Engineer Rocco Lardiere, whose 35-year career was inspired by Bonestell's art, also joins the Q&A panel. Lardiere has worked on over 200 space missions including Mars Rovers. For additional information about this screening, please visit the Laemmle Theatre webpage at www.laemmle.com/film/chesley-bonestell-brush-future.

Chesley Bonestell: A Brush with the Future Poster Art

"Saturn as seen from Titan" Poster Chesley Bonestell: A Brush with the Future Poster Art