Over Labor Day weekend, Ocean Galleries (9618 Third Avenue) is thrilled to celebrate one of the many artistic sides of Jane Seymour when she brings her “California Colorist” art exhibit to Stone Harbor, NJ. In addition to viewing and purchasing art from the collection, guests will have an opportunity to meet Ms. Seymour at gallery receptions from 7:00 PM to 10:00 PM on Friday, August 30 and Saturday, August 31, and from 1:00 PM until 4:00 PM on Sunday, September 1. 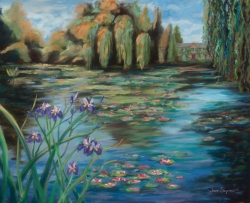 Stone Harbor, NJ, August 19, 2019 --(PR.com)-- To many, Jane Seymour is best known for her starring role in the hit television series, Dr. Quinn, Medicine Woman; while others remember her for many movie roles, in such films as Live and Let Die, Somewhere in Time, or more recently, Wedding Crashers. While her acting career continues to thrive – her latest role on the Golden Globe-winning Netflix comedy The Kominsky Method is sure to delight fans, the seemingly ageless beauty is much more than an award-winning actress. She is also an author, a designer, a producer, an entrepreneur, a spokesperson, a philanthropist, and so much more, including an incredibly talented and seasoned painter and sculptor.

Over Labor Day weekend, Ocean Galleries (9618 Third Avenue/609.368.7777) is thrilled to celebrate one of the many artistic sides of Jane Seymour when she brings her “California Colorist” art exhibit to Stone Harbor, NJ. In addition to viewing and purchasing art from the collection, guests will have an opportunity to meet Ms. Seymour at gallery receptions from 7:00 PM to 10:00 PM on Friday, August 30 and Saturday, August 31, and from 1:00 PM until 4:00 PM on Sunday, September 1.

This year marks Ms. Seymour’s fifth art exhibition at Ocean Galleries, and is one of her largest curated to date, featuring many original oil paintings, watercolors, and sculptures. In addition to numerous landscapes, seascapes, and beach scenes, the exhibition includes a series of art honoring Monet, several floral series including new single lily watercolors, an Open Heart series, as well as the Circus Suite published and released for this exhibit.

It was during a painful period in her personal life that Ms. Seymour turned to painting. She explains, “After my divorce, painting took me out of panic mode and into a serene, calm place. I could absolutely lose myself.” Since that time, she has become an accomplished painter and sculpture, exhibiting in numerous galleries, and has been commissioned to create paintings and sculptures.

Ms. Seymour was one of 10 artists asked to create a painting of an influential classic film for the TCM 20th Anniversary Project in 2014. Her favorite movie as a young girl was “Gone with the Wind,” and 2014 marked the seventy-fifth anniversary of the film.

“My watercolor painting portrays the cycle of nature and life, a beautiful sunset over the rolling acres of the Tara plantation and mansion, still in its former glory, and foreshadows the estate’s inevitable downturn, and eventual return. The imposing image of the tree in the foreground represents the strength and spirit of Scarlett’s character, albeit devastatingly flawed, while the silhouette of the lovers is bittersweet - we know there are many tragedies to bear on the road ahead. Tara remains a most beloved and timeless symbol of this sweeping historic, romantic, yet very human tale.” - Jane Seymour

Ms. Seymour was selected as the official artist for the Naples (FL) Winter Wine Festival, the year following famed American painter Robert Rauschenberg. She was asked to create a series of paintings to be used as illustrations for the elaborate auction catalogue being produced for the world class charity’s Fine Wine and Gourmet Chef event, benefiting the Naples Children and Education Foundation. The annual luncheon raises a staggering amount of money each year to help the disadvantaged children of Florida.

“In preparation, I studied the many colorful and delightful works of Marc Chagall and circle, to understand how they treated this universally-loved theme, and began painting a series of fun and lively watercolors. I was delighted that the unique watercolors were well-received.” -Jane Seymour

In 2008, Seymour launched one of her most successful brands to date, a special jewelry collection called "Open Hearts by Jane Seymour." Inspired by one of her original paintings of two hearts connected and open at either end, the exclusive designs symbolize that love has no boundaries and flows unconditionally.

Since then, it has become a universal symbol for giving and receiving love and, to date, one of the most successful jewelry lines. The following year, Seymour’s Open Hearts, the first book in a series of four, was published, reflecting life’s joys, heartaches, and inspirations, and symbolizes that only when you can love yourself and keep your heart open are you able to give and receive love.

“Family to me is more than genetic. It’s about the moments we have in life when we touch or are touched by another in times of adversity or challenge – when we open our hearts and souls and trust one another with our deepest feelings. These people become our sisters, brothers, mothers, fathers. They are our Open Hearts Family, the ones who share a special bond with us. It can be anyone, even an animal that brings peace and love into our lives. When we open our hearts, our family grows; so do we….and so can the world.” -Jane Seymour

Jane Seymour clearly believes in giving back, as evident in her support of numerous charitable organizations, such as the American Red Cross, the Christopher and Dana Reeve Foundation, City Hearts, and others. She also cofounded the Open Hearts Foundation, a nonprofit charity established to raise funds to enrich the lives of children in the areas of health, arts, sports, and education.

With each of her four previous exhibits at Ocean Galleries, Ms. Seymour has fallen more in love with the quintessential seaside resorts of Avalon and Stone Harbor. In fact, for this year’s visit, when Jane learned about a nearby non-profit organization near and dear to the owners of Ocean Galleries, the Helen L. Diller Vacation Home for Blind Children, she donated a piece of art in support of the charity.

The Helen L. Diller Vacation Home for Blind Children has been providing blind and visually impaired children an all-expense paid week of summer camp since 1972. Over the course of eight weeks each summer, between mid-June and mid-August, the Home operates a camp that offers many of the campers their first experience of feeling sand in their toes or tasting salt water on their lips. The campers’ range in age from seven years in age to fifteen years in age and the Home can accommodate twenty campers each week.

“We were delighted and so very grateful that Jane offered to donate one of her gorgeous artwork pieces in support of the Diller Vacation Home,” said gallery owner Kim Miller. The art will be featured in the Live Auction at their Annual Barefoot Ball Fundraiser taking place September 7, 2019 at the Windrift in Avalon. For more information and tickets, visit: Helen L. Diller Vacation Home for Blind Children

The “Jane Seymour – California Colorist” exhibition will be at Ocean Galleries in Stone Harbor Friday, August 30 through Sunday, September 1, and will include more than 85 original oil paintings, watercolors, and sculptures, as well as numerous giclée prints. Ms. Seymour will meet guests and sign purchased artwork from 7:00 PM to 10:00 PM on Friday, August 30 and Saturday, August 31, and from 1:00 PM to 4:00 PM on Sunday, September 1. The exhibition is free and open daily 10:00 AM to 10:00 PM with all artwork available for acquisition.

The “Jane Seymour – California Colorist” exhibition will be at Ocean Galleries in Stone Harbor Friday, August 30 through Sunday, September 1, and will include more than 85 original oil paintings, watercolors and sculptures, as well as numerous giclée prints