Los Angeles, CA, December 30, 2019 --(PR.com)-- Every year in February, Los Angeles turns into a sea of red carpet and celebrity sightings as the award season polishes Oscar. Oscars® night is full of glamour all over Hollywood, and the only party in Tinsel Town celebrating the blockbuster year of American and Chinese films and filmmakers will be “Hollywood China Night” at the world-renowned Beverly Hilton Hotel, Beverly Hills, California, USA.

Hollywood and China’s most elite filmmakers, as well as all eyes in China, will be on Hollywood for the 92nd Academy Awards ceremony, presented by the Academy of Motion Picture Arts and Sciences, honoring the best of the best of 2019 taking place at the Dolby Theatre in Hollywood.

The Beverly Hills Ballroom will be blazing with over 400 of Hollywood’s elite in filmmaking, celebrities, writers, producers, executives, entrepreneurs and investor representatives from both China and the USA. Attendees and their families will enjoy the Oscars® ceremony screening party and gala dinner, awards, entertainment and a fashion show.

The 4th Annual ACCS “Hollywood China Night” is the best chance to communicate closely with movie stars and celebrities from both Hollywood and China. “ACCS’s Hollywood China Night event is the only link that connects the USA and China, the two movie markets with by far the largest box offices that are backed by the two largest economies in the world,” shares Richard Walters, organizer of Night of 100 Stars. Speaking about China's film industry, Walters, the CEO of Bold Films, which was behind such seminal and successful films as Whiplash, Drive and Bobby, reports: "There have been six Chinese films in the past year that grossed over $500 million in China's domestic box office. That's truly impressive growth.”

Sun acknowledges that this year’s “Hollywood China Night” brings more top-tier artists: “We try to create the most influential bridge for both Hollywood and China movie industries in an exciting and glamorous venue; The Beverly Hilton is home of the famous Golden Globe Awards.”

China, with its desire for film recognition, has become a serious force to be reckoned with in the film world, especially in Hollywood where Chinese moguls are buying companies like Dick Clark Productions, and Chinese billionaire Wang Jianlin, chairman of the Dalian Wanda Group, is buying up Hollywood entertainment properties.

The prospects of co-production with the Chinese film industry are great. And to help Chinese and American companies generate more trade and co-productions together, this year's gala brings together dozens of stars and heavyweights from the USA and Chinese film industries, all looking to do business together. Speaking about the event, Sun shares: "Hollywood is the movie capital of the world and offers much expertise and creativity. And because of the high growth rate of the box office in China, China's film industry wants to learn from Hollywood. But creators and leaders from both sides must spend more time together to build trust and develop personal and professional relationships; then the deals will flow more easily."

ACCS, a nonprofit organization headquartered in California, has co-hosted some of the most influential Chinese/American events in Los Angeles. ACCS is responsible for numerous trips to China allowing American CEOs to get up front and personal with multi-billion-dollar companies such as Alibaba and The Wanda Group, as well as arranging meetings with difficult to reach high-ranking Chinese government officials and film executives in Shanghai. 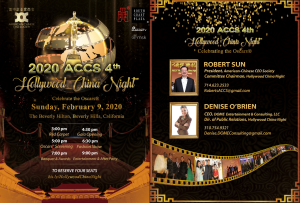