Newport Trading is Delighted to Announce the Release of the New Book, "My Joyous Battles with Chess Villains" by David Lucky

The author is a FIDE Master who in the book analyzes 119 of his most exciting chess battles, and shares some of his unique discoveries at the chessboard. The book contains many exhilarating games with Grandmasters, International Masters, and other champions. Also included are unique articles showing a missed win in a previous World Championship and one of the top theoretical novelties. 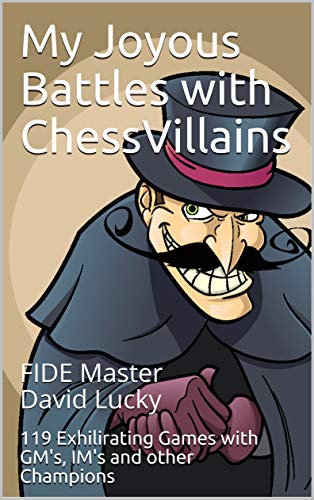 Newport Beach, CA, September 02, 2020 --(PR.com)-- For nearly forty years, FIDE Master David Lucky has been playing great players from around the world in chess tournaments. Along the way, he has won several Brilliancy Prize games, in addition to many other exciting games against Grandmasters, International Masters and other champions.

This book is a specially selected collection of 119 of his best games. Included are wins against many top Grandmasters, including six-time US Chess Champion Walter Browne. There are plenty of creative attacking games and amazing combinations that were published in various chess magazines and newspaper columns.