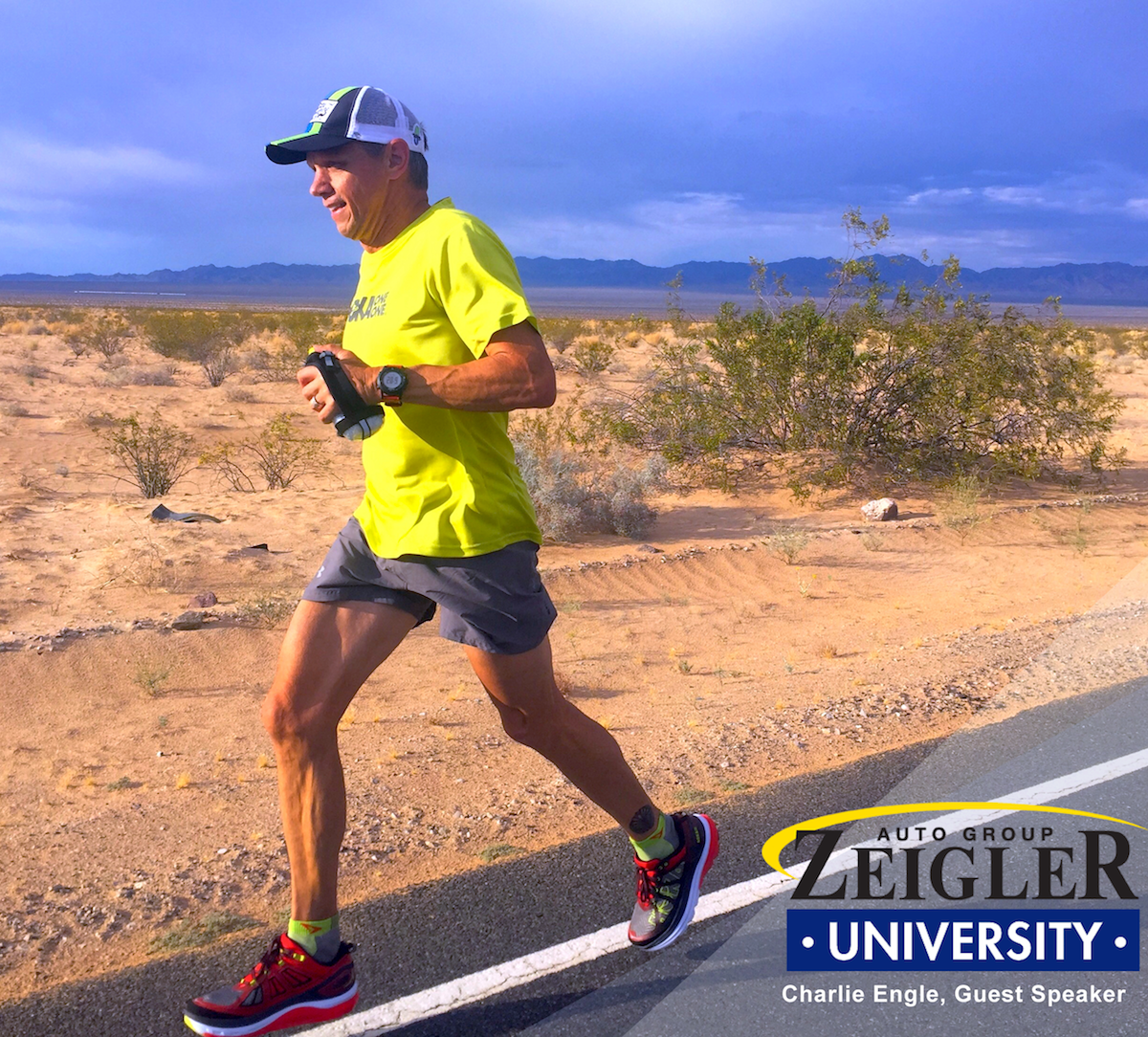 Kalamazoo, MI, October 15, 2020 --(PR.com)-- Today Zeigler Automotive Group announced that ultra-endurance athlete Charles Engle will join its Zeigler University Guest Speaker Series. All Zeigler employees are welcome to attend the presentation, which will take place on Friday, October 23, 2020 at Zeigler Honda's executive meeting room and through telecast at all of its dealerships.

"The Zeigler University Guest Speaker Series is something that is very important to me personally and professionally because it helps our team grow from the inside out. Mike Van Ryn, our director of talent development, and I take the time to handpick these speakers because of the value each and every one of them brings to the table. In Charle Engle's case, I know he'll bring invaluable insight to his session that will inspire our team," said Aaron Zeigler, president and owner of Zeigler Automotive Group.

Engle is a global ultra-endurance athlete and the founder of the 5.8 Global Adventure Series, one of the most ambitious expeditions in modern history, trekking from the lowest to the highest points on all seven continents. He's been featured in the New York Times, National Geographic Weekend, Outside, Runner's World, NPR's All Things Considered, Men's Journal, and The Tonight Show with Jay Leno.

He is also a subject of the documentary, Running the Sahara, narrated by Matt Damon, which highlights his historic, record-setting journey with his two teammates across the world's largest desert, running more than two marathons a day for 111 consecutive days, for a total of 4,500 miles. After crossing the Sahara and seeing the global water crisis first-hand, Charlie raised more than $6 million for clean water projects in Africa and helped establish an organization called H20Africa, now known as Water.org, one of the largest water nonprofits in the world.

"We are excited to have Charles Engle join us. It is always so rewarding for us to see team members learn from so many different speakers across all walks of life! Each speaker resonates with people in many different ways. With the Zeigler University Guest Speaker Series, we want to give our team members the opportunity to grow both personally and professionally. In fact, we have had a pattern over the years of our team bringing in family members, like their children to learn and grow too! This is what it is all about for us at Team Zeigler," said Mike Van Ryn, director of talent development.

His motivation to run and tackle extreme adventures stems from his battle with addiction to drugs and alcohol. Charlie has been in recovery since July 23, 1992, and he credits a large part of his recovery to the purposeful devotion and emotional release he experiences while running. He has said that "Drugs and alcohol were my way out. Running was my way through."

About Zeigler University
Zeigler University is an internal leadership and development program within the Zeigler Automotive Group organization dedicated to attracting, training, and retaining the best talent in the industry.

The program includes one-on-one mentoring, strategic recruiting; and programs such as the Zeigler University Speaker Series with past celebrity guest speaker appearances that include Grant Cardone, Bill Rancic, PJ Fleck and more.

Founded in 1975, the company ranks among the top 1% of automotive dealers in the U.S., and has earned recognition for its commitment to both customer service and employee satisfaction. Recently, Zeigler Automotive Group was named one of the 101 Best and Brightest Companies to Work for in Illinois and Michigan.
Contact
Zeigler Automotive Group
Francis Mariela
407-278-0621
zeigler.com