Poet's Choice Publishing is Proud to Announce the Publication of SEEING THE LIGHT, Short Stories and Artwork by Rick Williams

An earlier iteration of this book had as its subtitle, "Short stories of the ravages of alcoholism and addiction, mental illness, bigotry and (stories of) veterans of war.” It is a remarkable collection of broken characters overwhelmed by spiritual and physical challenges. The stories are augmented by very beautiful portraits of veterans. 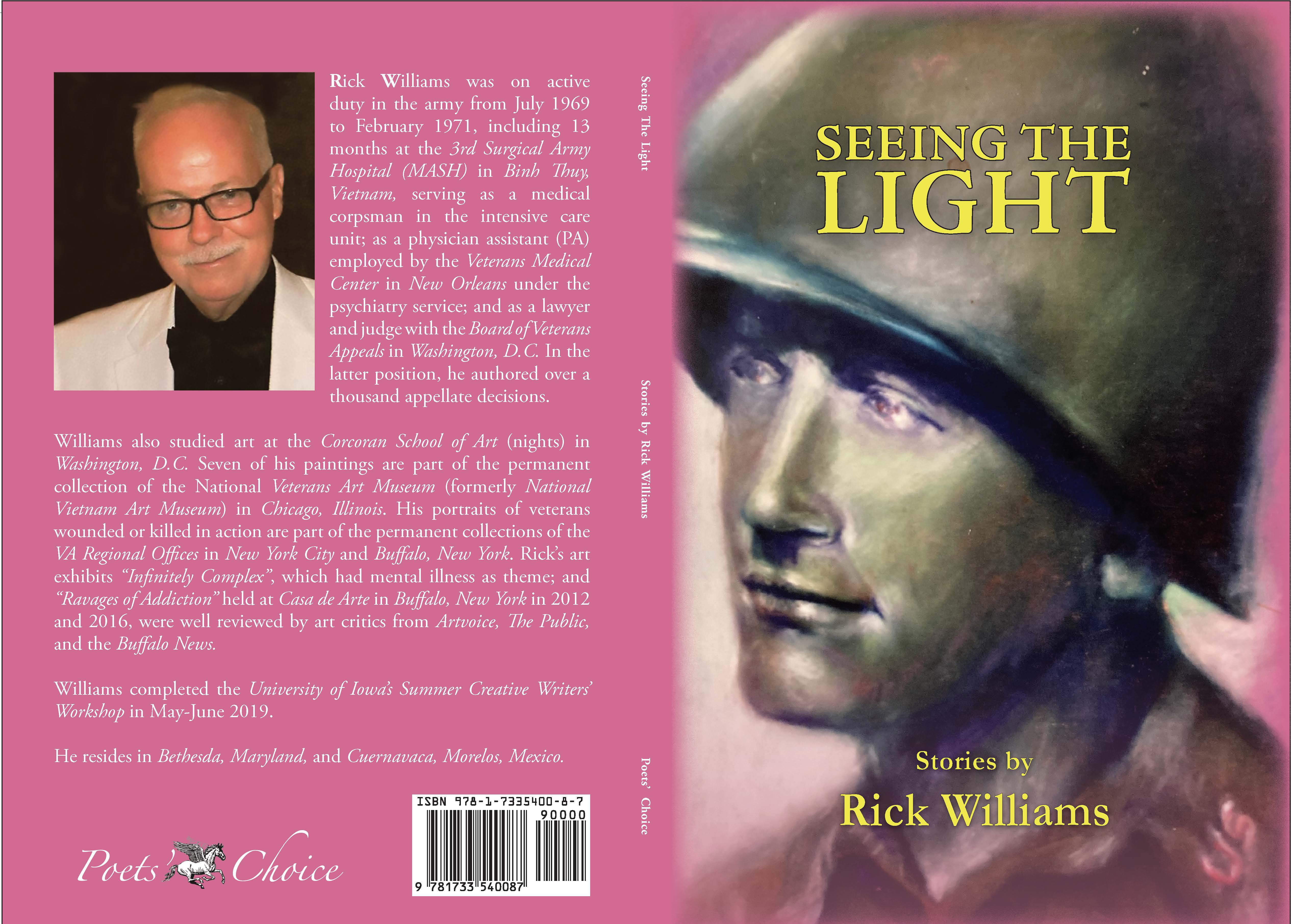 Bethesda, MD, April 02, 2021 --(PR.com)-- SEEING THE LIGHT has as its cover a beautiful portrait of a young soldier whose face is illuminated with inspiration and human compassion. It could be the face of the young medic in the first story of the book, “The Girl in the Oxygen Tent.” The boy is disenchanted with the senseless war in Vietnam and finds solace in his love for the young girl who has become his patient. It is a careful description of the Vietnamese culture and the soldier’s coming to terms with the pointlessness of this war. When his patient dies, he attends the funeral at some personal risk, and the story simply ends it seems, with no resolution. Like the war itself, there is no answer to the senselessness of death, and the death his country is inflicting on this culture.

Many of Rick’s stories seem to end this way. He seems to be saying there is nothing to be done in the face of such absurdity. At one point in an email, the author writes that none of the characters in his stories see the light. But the lucky thing for a reader is that he has written these stories, has seen the light through his talent as a storyteller. One thinks of Tolstoy’s “Death Ivan Ilyich,” and the courage it took Tolstoy to write of a man who realizes as he lies dying, that his life has meant nothing; but who, by the end, achieves insight and spiritual awakening. Often, the stories end with no explanation, Beckett like, with mysterious, ominous characters waiting silently, like fate for no particular reason.

The stories deal with war, but the beautiful portraits throughout this book are not meant to be illustrations of a particular branch of the service or moment in the war. They are there simply to highlight the additional talent the author has as a visual artist. These are stunning paintings with great psychological realism. They have achieved recognition in museums and private collections throughout the US. We congratulate Rick Williams for this debut collection, and thank him as many veterans have done for his work as a lawyer in their defense as well as the model of compassion and honesty he gives us in the lives of his characters.
Contact
Poets Choice Publishing
Richard Harteis
860-961-5138
www.poets-choice.com
www.WilliamMeredithFoundation.org
poets-choice.com