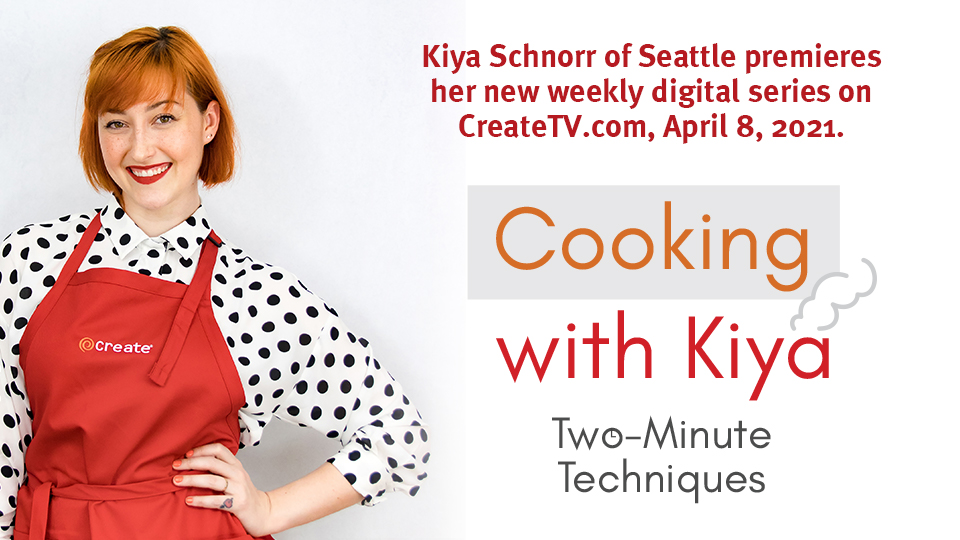 After winning the Grand Prize in 2018, which included $4,000 and production equipment valued at approximately $1,000 to finance and produce a web series of 10 two-minute videos, Schnorr relocated from New York City to Seattle, Washington, where she produced the series for the Create® channel web site CreateTV.com. Distributed and produced by APT, The WNET Group New York and GBH Boston, Create® is a national channel carried by 239 local public television stations and features lifestyle content: cooking, travel, home & garden, arts & crafts, fitness, and living.

“These dishes reflect Kiya’s culinary knowledge and her interest in combining unusual flavors with the freshest ingredients,” said Cynthia Fenneman, APT’s president and CEO. “Kiya’s enthusiasm, presentation style, and the intriguing recipes exemplify why our judges’ selected Kiya as the Grand Prize Winner,” she added.

Each two-minute video episode features key steps in preparing her dishes, along with detailed recipes and tips to help viewers customize to their tastes. Produced in her Seattle kitchen, Kiya includes information learned from a variety of cooking school classes as well as tips picked up through trial and error. These tips can be found on CreateTV.com and on Schnorr’s personal website linked from the digital series.

Judge Ellie Krieger praised Schnorr’s video: “I want to hang out with her in her kitchen! She had excellent tips presented in a clear and compelling way.” Rick Bayless added: “Fun video that proves you don’t need a big kitchen… good, practical tips!” Buki Elegbede, Grand Prize winner of the previous Create Cooking Challenge, liked Schnorr’s presentation, too: “Great job with the graphics…explaining the process and techniques in a clear, concise way. Kiya is your big sis whom you want to teach you how to cook!”

Although trained as a dancer, Grand Prize Winner Kiya Schnorr has always been interested in food. Schnorr started in the kitchen at a young age, cooking Italian food with her mother. Growing up in South Florida, she became curious about Mexican and Cuban influences in local cuisine, soon discovering the rich spices which complement Caribbean recipes, opening a world of new flavors to her palate. After first using recipes exactly as written, Schnorr then created her own versions, adding unique spices to add the “heat” she loved. By the time she was majoring in Dance at Florida State University (FSU), Schnorr was experimenting with her newfound interest in cooking for herself and friends. An avid blogger and photographer with interests in cooking and crafting, Schnorr lives in Seattle with her husband, Chris.