37% of Canadians believe COVID-19 was created in a lab and released by mistake, 31% that COVID-19 was created as a biological weapon in a lab, 15% that big pharma helped spread the virus, 9% that the vaccine includes a chip that will track people and 6% there is a link between COVID-19 and 5G. In comparison, 36% believe Princess Diana was assassinated, 33% any of the JFK conspiracy theories, 31% that a cure for cancer have been found but not released, and 29% that humans have been cloned. 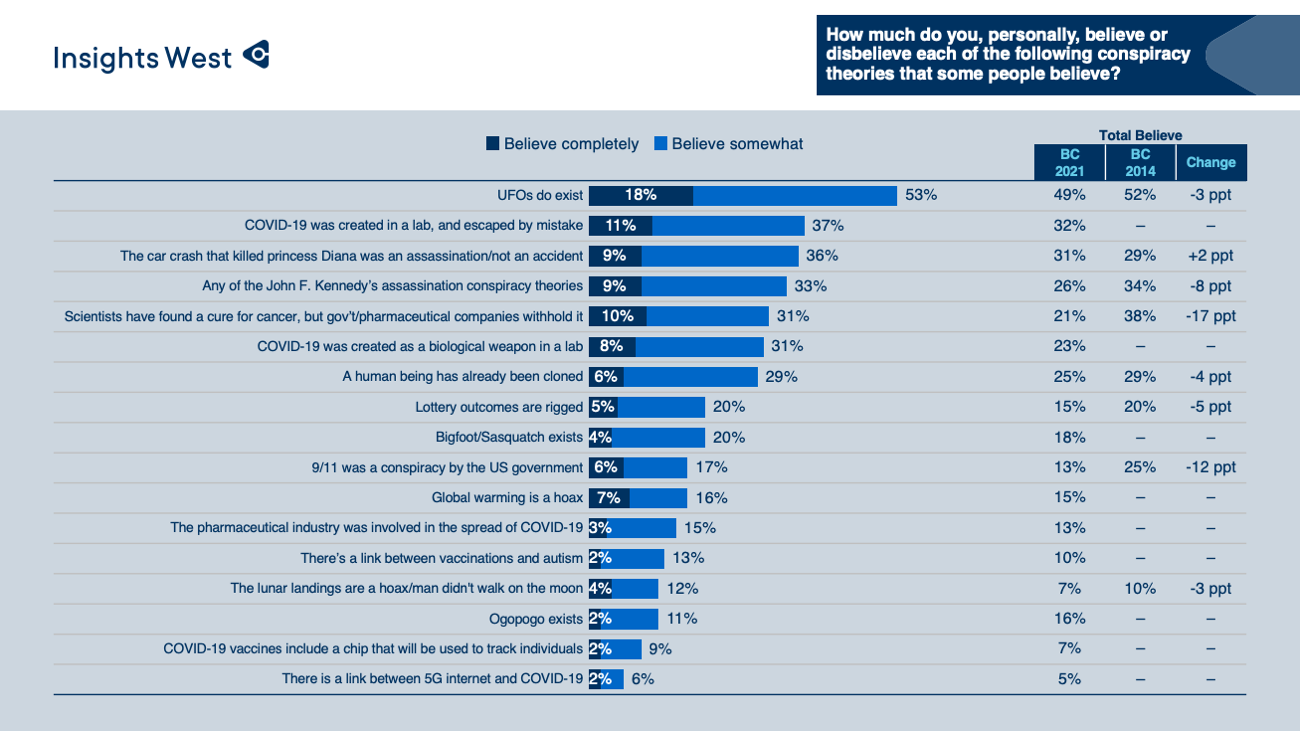 Vancouver, Canada, April 30, 2021 --(PR.com)-- A new poll by Insights West finds that various COVID-19 conspiracy theories are believed by a sizeable minority of Canadians across the country, at levels that rival many conspiracy theories that have been circulating for decades.

Other misinformation about COVID-19 is believed by a much smaller proportion of Canadians, including 15% who believe the pharmaceutical companies are involved in the spread of the virus. One-in-ten (9%) believe the vaccine includes a chip to track people (9%), and a small number (6%) that there is a connection between 5G internet and COVID-19.

Perhaps these numbers around COVID-19 aren’t that surprising given that a few other medical/scientific conspiracy theories also draw similar levels of belief. One that Insights West has been tracking over several years is that a cure for cancer has been found, but either governments or pharmaceutical companies withhold it – currently held by 31% of Canadians. A nearly equally high proportion believe that humans have been cloned (29%). A much smaller number (13%) believe that there is a link between other vaccines and autism.

In comparison there are other questionable beliefs that some Canadians hold - including the fact that 53% of Canadians believe UFOs exist. Fewer believe in the Ogopogo (17%) or the Sasquatch (18%), and an even smaller proportion (12%) believe the lunar landings were a hoax.

Where differences exist, males are more likely to believe conspiracy theories than females. The only exceptions are the Princess Diana conspiracy, where more women believe this (42%) than men (30%), and the belief that lotteries are rigged (23% for females versus 16% for males).

“It is unfortunate that the pandemic has resulted in a wide array of conspiracies circulating that are believed by believed by a sizeable number of Canadians, not by a fringe alternative segment of society,” says Steve Mossop, president of Insights West. “The proliferation of these theories has been exacerbated by the shareability of these views on social media, which has elevated conspiracy theories to perhaps as high as it’s ever been in today’s world. I believe that the vaccine hesitancy that we are seeing in this country can be widely attributed to these swirling conspiracy theories, much to the detriment of stopping this virus.”

About Insights West:
Insights West is a full-service marketing research firm based in Western Canada. Since 2012, the company has conducted over one million surveys, executed 2,000 studies, and issued over 350 press releases on a variety of topics, correctly predicting the outcomes of 25 out of 26 elections and plebiscites. Insights West is a team of passionate, truth-seeking researchers who question everything to uncover the truth and what is emerging for a diverse set of clients. With an understanding of shifting markets, consumer and societal trends, and commitment to uncovering truths through a proprietary toolkit and innovative research approaches, Insights West helps organizations make better decisions.

Results are based on an online study conducted March 31 to April 5, 2021 among a sample of 1,603 residents across Canada. Respondents are part of Insights West’s Feedback Community, a panel of BC residents recruited from a variety of sources and backgrounds who share their views and opinions on an ongoing basis and from other panels provided by partner providers. The margin of error with the total sample - which measures sample variability - is +/- 2.4 percentage points, 19 times out of 20. Discrepancies between totals are due to rounding.
Contact
Insights West
Steve Mossop
1-778-891-4762
https://www.insightswest.com/news/conspiracy-april-2021/