Two Florida artists team up on an innovative and colorful new line of award-winning works. First conceived as black and white ink drawings in the 1970s by Charles Ecker, Jamie Roberts adds her own modern spin digitally applying bright colors that speak to the era they were first created. With abstract concepts and palettes reminiscent of the Pop Psychedelic art movements, these "Distinctly Dazzling Doodles" begin in one millennium destined to end in another. 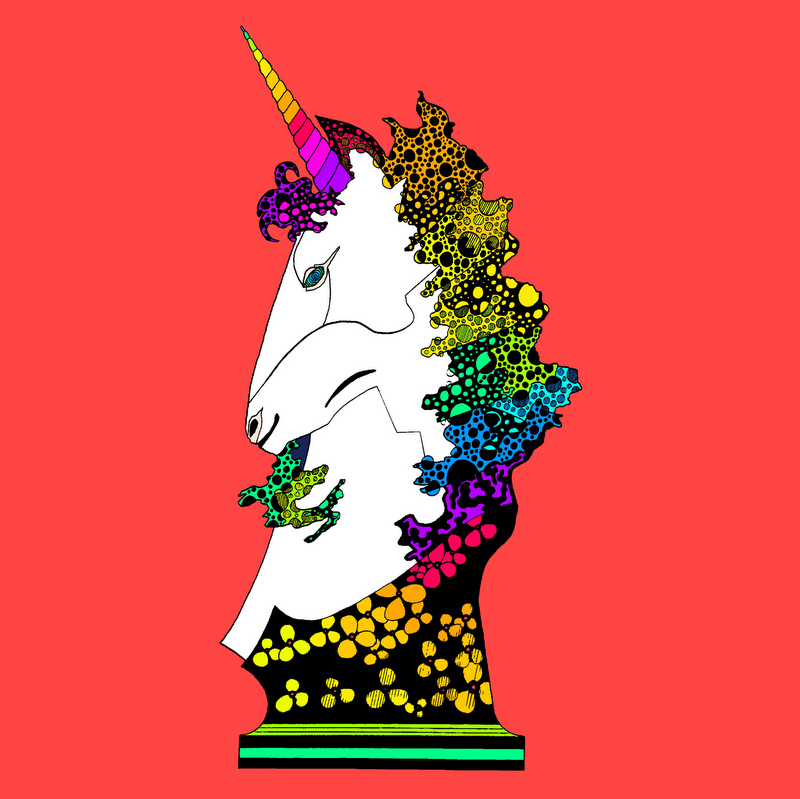 Millennial Jamie Roberts, facing the hardships of navigating a business during the Age of COVID-19, unlocked, by chance, a never-before-seen treasure trove of original 1970s Black and White India ink drawings, sprung from the once-steady hand of recent colon cancer and two stoke survivor Charles Ecker. From the first drawings, in the "Uni" series, she has gone on to create a color-dripped collection of "Distinctly Dazzling Doodles" that quickly notched an international Academia Arts Foundation blue ribbon right out of the gate.

The color palettes she works with pay homage to the era in which they were first created, a period when the Pop and Psychedelic art movements influenced the culture of the time, replete with hidden images.

A half a century ago, Ecker, a G.I. stationed in Korea in his early 20s, bought a small container of India ink, a fine-tipped pen, and some large sheets of heavy-weight bright white poster board as a means of passing the time off-duty when his communications shift ended at midnight.

Fast forward now to the above mentioned young women from South Florida, a skillful digital artist who is one of the first outside Ecker's immediate family to see what he had accomplished over that long-gone Seventh decade.

Now, these two are bringing his Black and White free-form "doodles" into the third decade of the new century with color, pizzazz and punch.

Ecker, of North Venice, Florida, met Roberts, of Ft. Lauderdale by chance. After seeking his body of work, she immediately expressed interest in teaming with him on a unique collaboration with even more amazing origins.

"Often," she noted, "I am attracted to art that I would not normally make myself. Charlie's 'stream of consciousness' style definitely caught my eye."

By the end of his overseas tour of duty, Ecker had completed about 30 what he called his "fancy doodles." Unfortunately, all but two were water-damaged to varying degrees when his belongings were stored at the very bottom of a military cargo ship on its way back to the U.S. Most had to be discarded but one, although cut down around the sides, was honored at Central New York's Munson-Williams Proctor Institute and a second Black and White, "Uni," was given to his bride. That is the one that Roberts first saw.

Upon his military discharge, Ecker, undaunted, continued amassing another two dozen "doodles" even selling one for $50 to a man who made 500 copies and said he would hire grammar school kids to color them with color pencils for sale around Ecker's home area. "Wish I had kept one," he noted.

With limited space in his Manhattan studio apartment, most all of his drawings were stashed in his closet. But he took a forward step and submitted a specially drawn work to The American Association of Certified Public Accountants, looking for a cover for its 1980 "Tax Rules Book." It was quickly accepted for a handsome fee, with a tan background added as black and white drawings, according to an editor at Art News who had been impressed with his works to date, were still out of favor.

Ecker, like Roberts, started early with interests in journalism. He then turned his attention to music and began a long career as a composer, mostly of Country and Americana music. To date, he has earned over 20 industry awards, including Career Country Composer at The Los Angeles Music Awards and a regular "Featured Artist" spotlight on Renegade Radio Nashville. He has five albums released on iTunes.In fact, The C.R. Ecker Band recently earned "Rising Star" honors in a recent international competition.

Robert's senior year of high school in the Cheyenne, Wyoming area found her in a painting class, and she soon began studying creative advertising at the University of Colorado, Boulder, where she received, in addition to her degree, a certificate in digital media that covered subjects such as 3D animation and web design. Those skills were carried into her early career, first in advertising and then as an entrepreneur in the operations of both a family-owned adventure park in Costa Rica and an aviation company in Colorado.

Now, 50 years in the making, a new chapter unfolds for Ecker and Roberts, under the collaborative (search engine friendly) name EckerRobertsArt.

The duo had planned to launch their new venture just before COVID-19 cast the world upside down, but were buffeted with personal, business and medical challenges like millions of others. Needless to say, now hopefully planted on what the media had called the "other sideone year ago" they are fully-focused.

As Ecker recounted: "There appears to be a new dawn for all with a signposts up ahead that have, in many colors, the smiling face of a Unicorn. Ours!"

The entire line of EckerRobertsArt wall art, clothing and accessories can be purchased through Redbubble and Society6 sites.